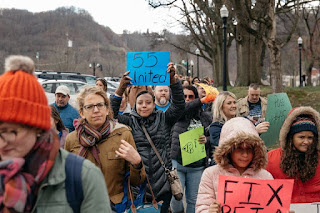 On this International Women's Day, a special salute goes out to the women who played a leading role and were the main force in the victorious West Virginia teachers wildcat strike.

WV strike leader Olivia Morris will be conversing with CTU Political and Legislative Director Stacy Davis Gates tomorrow in Chicago, in a program hosted by the CTU. Congrats to teachers and paras at Namaste Charter School on Chicago’s south side who, despite strong admin resistance, just voted to unionize. Another important victory for Chicago ACTS and the CTU.

One of my Twitter followers is worried that the victory, will do more to say--"charters are public schools"? My answer, as I've been writing about since back in '09: Charters are public schools, handed over to private (often for-profit) companies, but operated with public funds, to the detriment of regular public schools. For the past decade, it has often been the charter operators themselves who, trying to evade NLRB rules regarding the collective-bargaining rights of their teachers and staff, claim that charter teachers are not public employees.

The real point here is that whether you consider charters public or private, teachers should have the right to collectively bargain. The merger of the Chicago Teachers Union (CTU) with Chicago Alliance of Charter Teachers and Staff (ChiACTS) points the way forward.

For more on this, listen to the podcast of our Hitting Left show from last June featuring Stacey Davis Gates from the CTU and ChiACTS Pres. Chris Baehrend.