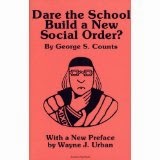 “The urgency is real. We are not saying that it is too late to take actions, but the window for action is closing rapidly. The choice is ours, and the clock is ticking.” -- Bulletin of Atomic Scientists Executive Director Kennette Benedict

Back in 1932, George S. Counts asked his colleagues in the Progressive Education Association, "Dare the School Build a New Social Order?" Counts, who was influenced by progressives like John Dewey and Francis Parker, favored the progressive education model of child-centered learning. But he and other social-reconstructionists feared that school curriculum, even in progressive schools, was being sanitized and separated from the real social conditions like the Great Depression and the global crisis caused by the rise of fascism in Europe and the threat of a new world war. He called for a "critical pedagogy" that might produce a new generation of social justice activists, capable of "reconstituting the democratic tradition and of thus working positively toward a new society".

I'm thinking about Counts' challenge to the educators of his time this morning, as I'm reading that the board of the Bulletin of the Atomic Scientists (BAS) has decided to move the minute hand on its symbolic Doomsday Clock 2 minutes closer to disaster. The clock now shows 3 minutes before midnight because the “probability of global catastrophe is very high” as a result of continuing climate change and efforts to modernize nuclear weapons stockpiles. The BAS board includes more than 20 scientists, 17 of whom are Nobel laureates.

It's stunning that the clock should move this far, even after six years of a liberal and self-proclaimed progressive, Democratic Obama administration which pledged to "set a goal of a world without nuclear weapons, and pursue it." Sad to say that the pace of dismantling our massive stockpile of nuclear weapons has slowed nearly to a stand still and the development of new weapons of mass destruction and modernized delivery systems is rapidly moving forward. And now the threat of a new Cold War with Russia is growing stronger.

Global greenhouse gas emission rates are now 50% higher than they were in 1990. Emission rates have risen since 2000 by more than in the previous three decades combined. Investments have continued to pour into fossil fuel infrastructure at a rate that exceeds $1 trillion per year, with additional hundreds of billions of dollars in continued fossil fuel subsidies.

Faced with this global crisis and rising poverty and racial oppression (the new Jim Crow) here at home, the question of the role of teachers and schools is back on the table as is the question posed to progressive educators by Counts more than 80 years ago.