Which side are you on?

After his friend and former colleague, Diane Ravitch declared, "I Stand With the Teachers of Wisconsin," AEI's Rick Hess somehow felt compelled to make clear to his patrons exactly where he stands. No surprise there since Hess' organization is funded by union-busting billionaires like the Koch Brothers.


***
Speaking of which-- Gov. Walker is now the laughing stock of Wisconsin after his recorded butt-kissing conversation with David Koch impersonator and Buffalo Beast editor, Ian Murphy. Trying to impress his patron with his cleverness, Koch revealed his secret plan to trick boycotting Democratic senators back to Madison for a pretend compromise meeting.  What great grist for Jon Stewart's mill. 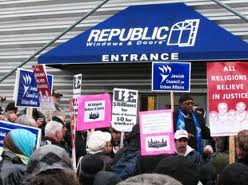 President Obama's lips remain sealed. How far he's drifted since that December, 2008 day of hope, when then president-elect Obama came out strongly in support of Chicago union workers who sat-in at Republic Window and Door to keep the plant from leaving the state.

Side Note on the Republic battle: Obama's new chief of staff, Bill Daley, was Midwest chairman of JPMorgan Chase, which owned 40 percent of Republic.


***
If you can make it to Mad City this Saturday, the teachers unions have scheduled a giant rally at the capitol for 3 p.m. See brother Fred's blog on this.
Posted by Mike Klonsky at 12:42 PM