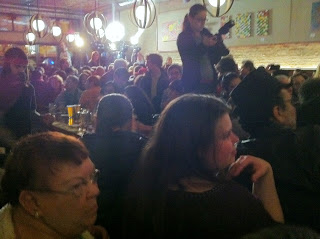 Last night's Miguel del Valle victory party at Revolution Brewery, over in the 35th Ward, actually felt like victory. Even though big-money candidate Rahm Emanuel, as expected, won the mayor's race handily, spirits (no, not just those) ran high. When Miguel finally arrived, the place went up for grabs. The hundreds of supporters, including many young, hard-core community organizers,  exploded into chants of "Miguel, Miguel..." I had the feeling that this was the beginning of something big, rather than just the end of another campaign.

Of course, time will tell. I had the same feeling standing in Grant Park at Obama's victory celebration in 2008. But after that victory, the movement went to sleep, anesthetized by phony Democratic Party promises. Still, given the events of the past two weeks, from Cairo to Madison, I walked out into the crisp Chicago air feeling as hopeful in this local electoral defeat as I did that night of victory in '08.


In what could have been a concession speech, del Valle laid claim, “There are people willing and able to fight the battles that need to be fought… We are going to build an agenda that says progress should be for all and not for some. I can feel it coming.” We haven’t missed our opportunity. Our moment to democratize Chicago has just begun. February 22nd doesn’t mark a loss but a first step toward victory. -- - B. Loewe & Josh Prudowsky