It's not just about unions... 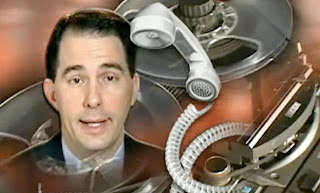 When the prankster called Gov. Walker and mentioned "special interests" the governor didn't flinch. He didn't have to be told in whose interests he was working. David Koch had bankrolled his campaign and contributed over $1 million to the Wisconsin Governor's Assoc. The Koch-funded Wisconsis T-Party were his campaign workers.

Walker's pay-back: The gov's bill gives him power to sell off state-owned power plants to Koch Bros. in no-bid contract at any price.
Shock troops: Faced with no-let-up protests against the union-busting bill by teachers and public workers, the Koch Bros. are mobilizing their T-Party shock troops for a confrontation Saturday in Madison.

Deb Meier reflects on her accidental trip to the protest in Madison in today's Bridging Differences.
Posted by Mike Klonsky at 8:57 AM

Email ThisBlogThis!Share to TwitterShare to FacebookShare to Pinterest
Labels: Wisconsin