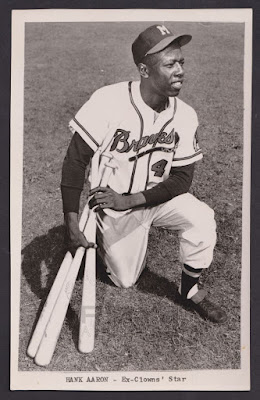 We have lost someone who, even though he played much of his career in Atlanta, was a fierce foe of Jim Crow—and then the New Jim Crow, with its savage inequities in the criminal justice system. As he once said, with his deep and sincere humility, “Am I a hero? I suppose I am, to some people. If I am, I hope it’s not only for my home runs.… I hope it’s also for my beliefs, my stands, my opinions. Still, I’m not at ease being a hero.” -- He Had a Hammer

...in response to an assassination threat from a Trump supporter:

“On one hand you have to laugh, and on the other know that the reason they were this brazen is because they thought they were going to succeed.” -- @AOC

With robust testing, we can open schools this spring before the vaccine is widely available.We have spent months studying this problem and finding solutions. We know how to minimize risks enough for everyone to trust being back in a classroom. -- USA Today

“We worked through a pandemic. I’ve been working here for 28 years, and it’s hard work,” said Ismael Cancela, a warehouse worker and Local 202 member. He told me that the offer of a 32-cents-per-hour-raise was a “slap in the face.” -- The Intercept

...Tells CNN Sunday that the country was experiencing an uncontrolled spread of the virus. "The plane in a nosedive. And we've got to pull it up." -- The Hill

No, we do not need new terrorism laws. The Capitol riot wasn’t caused by a lack of legal authority. -- Slate

“The idea that you can get up here and talk about what you know, what the evidence and science is, and know that’s it — let the science speak — it is somewhat of a liberating feeling.”  -- Maddow

This virus does not see or care about nationality, borders, or religion — its devastating impact is everywhere. The Netanyahu administration has a moral and humanitarian obligation to ensure that both Israelis & Palestinians have access to vaccines.https://t.co/mcD5TXLTI3