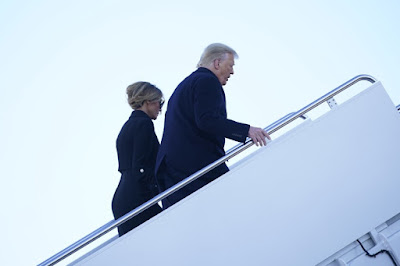 WASHINGTON — The Justice Department’s top leaders listened in stunned silence this month: One of their peers, they were told, had devised a plan with President Donald J. Trump to oust Jeffrey A. Rosen as acting attorney general and wield the department’s power to force Georgia state lawmakers to overturn its presidential election results. -- NYT

Impeachment aside, if this isn't enough for the Attorney General and state prosecutors to put Trump, Giuliani, Jeffrey Clark, and the rest of their co-conspirators behind bars for a decade or two, they should turn in their prosecutor badges and find another line of work.

The latest...The acting head of DOJ's civil division spoke with Trump about a plan to overturn the presidential election and then told Acting AG Rosen that he was going to be replaced in order for the plan to be implemented. But then came the problem. DOJ senior leaders threatened to quit en masse and let the cat out of the bag.

According to the NYT:

Mr. Trump’s decision came only after Mr. Rosen and Mr. Clark made their competing cases to him in a bizarre White House meeting that two officials compared with an episode of Mr. Trump’s reality show “The Apprentice,” albeit one that could prompt a constitutional crisis.

If Trump's plotting to fire Rosen, on top of his phone call to Georgia election officials, on top of his provoking the MAGA riot at the Capitol aren't indictable, what the hell is?

The real question here is, do Democratic leaders have the nerve to go after the grifter WH crew and the Trump family on criminal charges rather than, or alongside another impeachment trial down the road?

All I know is, if D.T. was Black and had filched some laundry soap from Safeway, he'd be rotting in jail.

As a public defender, I represented a client charged with stealing detergent. Held in on $3000 bail he could not afford.