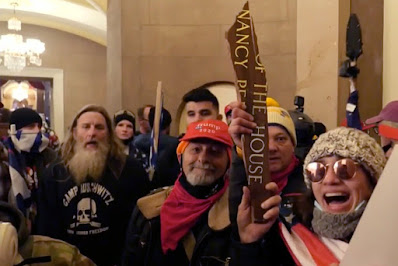 Another man, wearing a red Trump hat, told the officers, “We backed you guys in the summer. When the whole country hated you, we had your back.” At this point, one officer guarding the door said to the others, “They’re ready to roll,” and gestured to them to come with him, the video shows. The officers stepped away from the door together and moved to an adjacent wall. -- Washington Post

"We need a Republican Party..." -- Intelligencer

You fill in the rest. Ie. "like a fish needs a bicycle."

That the attempted coup failed shouldn’t blind us to its significance or the stain it has left on America. Nor to the importance of holding those responsible fully accountable. Trump’s culpability is beyond dispute. -- Guardian

Predictably liberal pundits are now telling us that the far-right has committed suicide, that the age of Trump has ended, and that the Democrats are free to build their shining city on the hill. In fact, the riot was a deus ex machina that lifted the curse of Trump from the careers of conservative war hawks and rightwing young lions whose higher ambitions have been fettered by the presidential cult. -- Guardian

“As your President, I showed a lapse in judgement [sic] yesterday during an interview. For that I am sorry. I brought negative attention to our Lodge, the FOP family, and law enforcement in general. -- Sun-Times