Wednesday was a MAGA dress rehearsal 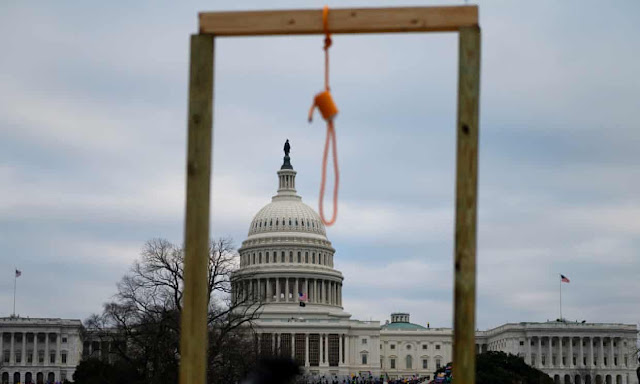 It appears that Wednesday's assault on the U.S. Capitol was only a dress rehearsal for so-called Million Militia Marches leading up to Inauguration Day, with armed white-supremacist and fascist groups primed to attack government buildings and perceived enemy politicians in all 50 states.

As with the online chatter ahead of that assault on the Capitol, new online calls to action are rife with insurrection talk and vows to bring guns to Washington in defiance of the city's strict weapons laws. Twitter cited some of these posts in its announcement Friday night stripping Trump of his account and preventing him from creating new ones in the future. Some event listings are openly discussing delivering "justice" for Ashli Babbitt, a rioter and Air Force veteran who was fatally shot by police inside the Capitol on Wednesday.

Unlike the first assault, which was an attempt to overturn the Democrats' electoral victory and keep Trump in power, the next actions, planned or unplanned, reflect a lack of faith in electoral politics on the part of the MAGAs. An online militia forum called for recruits in Kentucky because "diplomatic efforts have been exhausted."

Whereas the last riot had a semi-official air about it, having been inspired and called for by the POTUS himself, the next rounds will be organized mainly by loosely-affiliated Republican and other right-wing groups, Proud Boys, and neo-Confederates, who apparently have given up on any electoral or constitutional path to power. Most have already turned on Trump and Pence for having sold them out last week.

For example, the St. Croix County, WI Republican Party is telling its members to "prepare for war" and to remove "leftist tyrants" from office. Scrawled across the top of the party's homepage is the Latin phrase "Si vis pacem, para bellum," which is followed by its translation: "If you want peace, prepare for war."

But rather than influence the next elections, the next wave is designed to cause fear and chaos, including disruption of the pandemic recovery. This, the very definition of terrorism.

The question remains...how prepared will police, FBI, Secret Service, and the military be for another round of riots? Once shooting begins, security efforts have already failed and the fascists have succeeded. They are quite willing to use their rank-and-file protesters as human shields and cannon fodder. Another question has to do with cops and even elected officials taking part or even leading the assaults as was the case Wednesday.

Here in Chicago, aldermen and community activists are demanding the resignation of John Catanzara, the President of the Fraternal Order of Police after he came out in full-throated support of the Trumpists, making excuses for the riots even as rioters caused the deaths of capitol cops.

As long as we're talking impeachment, why not start here? Globally, there were more than a half-million new corona cases reported yesterday. One-third of them in the U.S. alone. US deaths: 375,373 (up 1,365 from yesterday). This with a president and political regime purposefully sabotaging Covid recovery and enabling massive profiteering off the pandemic.

The department with the oxymoronic name Homeland Security is in total shambles and that's probably a good thing. With the main threat to national security coming from the White House rather than from foreign terrorists, and the inability (unwillingness) of the regime to protect even itself against Trump-inspired, white-supremacist, domestic terrorism, another DHS director has called it quits.

Chad Wolf, who was never formally appointed, lasted only 14 months before joining the mass exodus of rats from this sinking ship. How do you "resign" from a post to which you were never appointed? Beats me. Wolf was roundly condemned for his role as Trump's wingman in the war on immigrants. If one thing has become clear since Wednesday, it's that the main threat to homeland security is homegrown, not imported.

As the siege on the Capitol shows, White supremacists are not pro-cop. They are anti-Black. They defend cops who kill Black people and attack cops who get in their political way.

I’m still tripping that folks thought they could take off a few days of work, go do an insurrection, and then fly on home and resume normal life.