Florida moment, the morning after 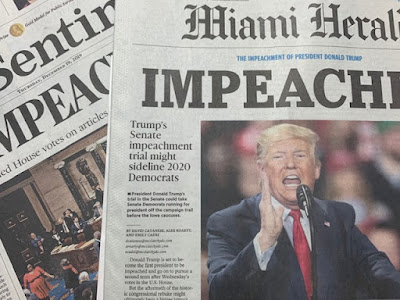 I'm down here in Trumpland (so the polls tell me), visiting family and getting a respite from the Chicago winter for a few days. I stopped in Walgreens early this morning to pick up the local papers. When I set them on the counter to check out, an older white guy in a Hawaiian shirt, standing behind me in line, sees the IMPEACHED headlines and goes off. But not the way I expected.

"Did you see? They impeached the son-of-a-bitch."

The two black women behind him in line chime in. One asks, "Is he really impeached? I hate that Trump. He's so rude and nasty. Are we rid of him?"

The second woman adds, "He's holding these rallies all over and you know, he doesn't even pay his people. He never has anything nice to say about anyone."

The white guy clarifies: "No, he's still president until the Senate votes him out. And that ain't happening."

The anti-Trump chatter goes on for another minute, with the black woman behind the counter joining in, shaking her head in frustration. "How did he ever get elected?"

I'm grinning, happy that my newspapers were the catalyst for this anti-Trump mini-rally. Just to make sure I'm not pegged as a deplorable, I say, "That's okay. We'll kick him out in November." I know, that wasn't all that revolutionary or inspiring. But in the moment, it was all I could think of.

My takeaway...Hatred of Trump among many is personal and visceral, not just political; i.e., there was no mention this morning of the Ukrainian arms deal or the phone call to Zelenskiy.

I, who've been the most skeptical of the Democrats' impeachment gambit, realize that this was just a snapshot and that us two old anti-Trump white guys in Walgreens aren't indicative of our demographic's voting patterns. But on this rainy Florida morning, the day after impeachment, I'll take it.


****
I'll be AWOL once again from Friday's Hitting Left show. In the NBA, when LeBron or Kawhi miss back-to-back games, they call it "load management." Exactly!

But you can tune in to www.lumpenradio.com tomorrow from 11-noon CT where brother Fred will be doing our annual movie talk with fellow film buffs Susan Kerns and Floyd Webb.
Posted by Mike Klonsky at 8:30 AM