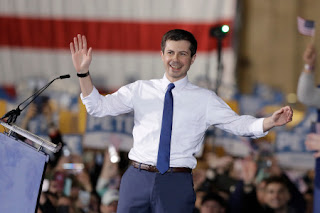 “I have to confess that I was slow to realize ― I worked for years under the illusion that our schools in my city were integrated because they had to be because of a court order,” the Democratic presidential candidate said at a North Carolina talk with the Poor People’s Campaign. . -- Mayor Pete Buttigieg

There's no need for me to beat up on Pete Buttigieg any further, now that the master of the white blindspot has all but eliminated himself as a serious presidential candidate.

But I just have to say that I spent a good deal of time in South Bend high schools a decade ago and it only took me about a minute-and-a-half to notice that the schools were racially segregated. Why did it take him so long?

Of course, I wasn't the first to notice. The district has been signing onto consent decrees and deseg plans for the past 40 years, plans which were largely ignored. Last year's Focus 2018 plan, essentially did an end-run around the consent decree in favor of "school choice". It reminded me of the way Chicago failed to respond to deseg orders right up until 10 years ago when Arne Duncan got a federal judge to relieve the district of its obligations under its own consent decree.

South Bend schools are governed by the South Bend Community School Corporation, which has a board of publicly elected members. I say this only to remind myself and my fellow elected school board supporters that an elected board is hardly a panacea when it comes to racial desegregation.

According to the Notre Dame Observer:


In South Bend, "...black and Latino students are disproportionately punished, suspended and dismissed from schools, crippling chances of academic achievement and obstructing efforts for “equitable and supportive learning environments for all students.” Black students are disproportionately arrested in public schools as compared to white students, resulting in a school-to-prison pipeline fueled by zero-tolerance policies. Beyond school discipline, residential segregation and the ill effects of concentrated poverty further disadvantage minority students trapped in segregated schools.

The road to Democratic victory in 2020 runs through the black community, and I suspected the Buttigieg campaign was a loser when I watched his announcement to run back in April, in a cavernous South Bend former Studebaker factory, filled almost entirely with white supporters.

Buttigieg has led a rejuvenation of his city's downtown area, true. But his is a gentrification strategy that left out a quarter of the population living as outsiders and living at or below the poverty line. That's a quarter filling most of the seats in South Bend's public schools.

Last week, The Root’s Michael Harriot penned a viral op-ed billing Buttigieg as “a lying motherfucker” for stating eight years ago that lower educational achievement within impoverished minority communities boils down to a lack of role models.

Not my choice of words, but I understand.
Posted by Mike Klonsky at 2:22 PM