18 years of lies on Afghanistan revealed 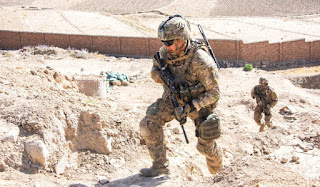 “History is a set of lies agreed upon.” -- Napoleon Bonaparte


Three U.S. presidents, Bush, Obama, and Trump, have bought and sold this big lie to the public and built their failed foreign policies upon it.


A confidential trove of government documents obtained by The Washington Post reveals that senior U.S. officials failed to tell the truth about the war in Afghanistan throughout the 18-year campaign, making rosy pronouncements they knew to be false and hiding unmistakable evidence the war had become unwinnable. -- Craig Whitlock, Washington Post

LOOKING BACK...On Oct. 2, 2002, then IL State Senator Barack Obama said in a major speech at an anti-war rally we organized in Chicago that "I am not opposed to all wars. I'm opposed to dumb wars." He referred to the Iraq War as his "dumb war" example in contrast to Afghanistan, which was billed as a winnable and necessary war to topple the Taliban government, drive out al Qaeda terrorists and install a pro-U.S. regime in Kabul.


"We must embrace America's singular role in the course of human events but we must also be as pragmatic as we are passionate, as strategic as we are resolute.


Robert Kagan, a former adviser to his 2008 opponent John McCain, warned that a quick withdrawal threatens recent gains against the Taliban - and popular opinion could swing against the president if an emboldened enemy takes the speech as a cue to step up attacks.

"This is a political decision, not a military decision," he told POLITICO. "Americans are tired of this war, that's true. But they hate losing more, and if there's the perception that we're being run out of there, the public will turn on him fast."

The government has not carried out a comprehensive accounting of how much it has spent on the war in Afghanistan, but the costs are staggering -- into the trillions.

Now, Trump says he's ready to engage in peace talks with the Taliban, in preparation for a U.S. troop withdrawal.


News of the talks came just before The Washington Post reported it had obtained more than 2,000 pages of government documents that it says show how U.S. officials have for years misled the public about the war in Afghanistan.

What an irony it would be if Republican Trump, facing impeachment and a difficult 2020 re-election campaign, ended the war that Democrats couldn't or wouldn't end. Shades of Republican, Richard Nixon in March of 1973, withdrawing his defeated army from Vietnam, only to be impeached in October of that same year.

I'm doubtful. Most likely, this is for media consumption.

The media has been complicit... The editorial board of the very same WaPo that this week revealed the pile of lies driving the Afghan war, opposed the war's end just months earlier.


The Washington Post’s editorial board (1/28/19) was similarly apprehensive at the prospect of US withdrawal. Lamenting what it considered a deal brokered “mostly on the enemy’s terms,” it proclaimed that “an end to the Afghan war is desirable, but not at the expense of everything the United States has helped to build there since 2001.” -- FAIR

Tell us, WaPo. What exactly has the U.S. built there? The truth, this time please.
Posted by Mike Klonsky at 5:09 AM