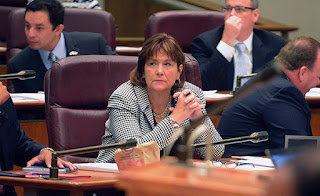 “This vote is easy for me,” Ald. Susan Sadlowski Garza, 10th, said, because it closed the gap without layoffs, increased the minimum wage and opened libraries closed on Sunday.

Chicago's city council has approved by a 39-11 vote, a budget that will raise the minimum wage for city workers to $15/hr and it won't take six years to fully implement as it does under the new state minimum wage law. The city's minimum wage will rise to $15 by 2021 and apply to youth, people with disabilities and other groups that historically have been paid less.

The vote represented a big win for Mayor Lori Lightfoot who, after only six months in office, has been able to end so-called, "aldermanic prerogative" and slowly begin to close the city's huge budget gap without a large property tax hike.

And guess what? Businesses aren't fleeing the city and the Willis and Trump Towers (unfortunately) haven't crumbled into the river as predicted by the corporate lobbyists' fear campaign.

Restaurant servers and other tipped workers aren't fully covered under the new law and that's not good.

As the Chicago Reporter's Nicole Hallet points out:


There are many good policy reasons to abolish the tip credit, including ensuring that workers have pay stability and combating the problem of sexual harassment in the service industry. Women working in restaurants with lower minimum wages than other industries in the state were twice as likely to report being sexually harassed by a customer than women who were paid their state’s minimum wage.

But tipped workers will see their minimum increase to $8.40 an hour on July 1, from $6.40 currently, and the city is directed to study the impact of tipped wages on working-class families so it can revisit the issue in the future. The tipped wage will be set at 60% of the minimum wage — meaning it will rise to $9 in 2021 — and increase accordingly as the minimum wage rises annually with the consumer price index. 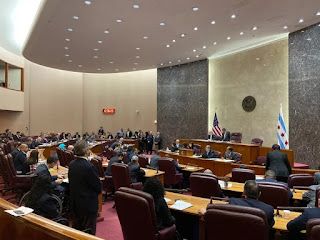 As for me, I think all workers should be paid a living wage and that none should have to work for tips. But that's for another post and another day. I still think passage of the mayor's budget is an important victory for the city's working people and marks a significant break from the policies of the previous regime.


The vote should have been easy — and it was for 39 council members — but 11 progressives voted no.

Well, that's not exactly right. Six of the no-votes came from the council's socialists who blocked with a handful of what's-in-it-for-me and anti-Lightfoot aldermen to try and stop passage of what is arguably the most progressive budget in the city's history.

“This vote is easy for me,” Ald. Susan Sadlowski Garza, 10th, said, because it closed the gap without layoffs, increased the minimum wage and opened libraries closed on Sunday.

While I'm elated that there's finally some real debate in the council, I'll leave it to the 11 to explain their votes on this one.

COMING UP ON HITTING LEFT...

The overstuffed and possibly hungover Klonsky Bros. are taking today off. But you can listen to our archived interview with veteran civil rights activist, Timuel Black and his co-author of Sacred Ground, Susan Klonsky. That's today from 11-noon on WLPN 105.5 FM in Chicago. Streaming live at lumpenradio.com.

Tune in on Friday, Dec. 6th, when our in-studio guest will CTU Pres. Jesse Sharkey.
Posted by Mike Klonsky at 6:01 AM