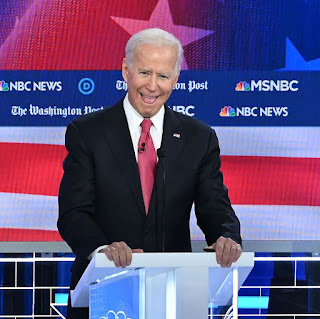 
Biden last night: I think we should decriminalize marijuana, period. And I think everyone -- anyone who has a record should be let out of jail, their records expunged, be completely zeroed out.

Me: Biden is the sole Democrat in the 2020 field who opposes legalizing marijuana at the federal level. Just five days earlier, speaking at a town hall meeting in Las Vegas, Biden said he opposed the legalization of marijuana claiming, there is not “enough evidence” as to “whether or not it is a gateway drug.”


Biden: I come out of a black community...

Me: Really? Who knew?


Biden: I have more people supporting me in the black community that have announced for me because they know me, they know who I am. Three former chairs of the black caucus, the only African-American woman that's ever been elected to the United States Senate, a whole range of people...

Kamala Harris: No, that's not true. The other one is here.

Me: And she sure hasn't endorsed Biden.

Biden: The fact is that right now the vast majority of Democrats do not support Medicare for all.

Me: 77% of Democrats support Medicare for all (KFF Tracking Poll).
Posted by Mike Klonsky at 12:33 PM