14 years after Katrina, half of the schools in New Orleans all-charter district are considered "failing". 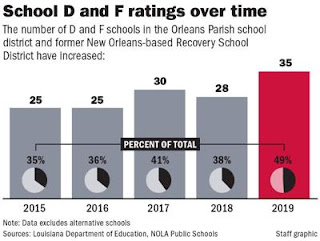 On August 29, 2005, Hurricane Katrina decimated much of the Gulf Coast, including the city of New Orleans. The hurricane triggered a chain reaction which led to the near-total abandonment of the city and its public school system. Over 1,200 died in the storm and nearly half the evacuees never returned.

For some conservative ideologues like Univ. of Chicago economist Milton Friedman and other neo-liberal reformers, the storm's devastation wasn't as much a disaster as it was an opportunity to replace the city's highly segregated, predominantly African-American public school system with privately-run, publicly-financed charter schools.

Former Secretary of Education Arne Duncan called Katrina “the best thing that happened to the education system in New Orleans,” because it gave the city a chance to rebuild and improve its "failing public schools."

The Tribune's McQueary wished for a similar disaster to strike the city of Chicago so it might follow the New Orleans example.

Now, 14 years later, comes the news that nearly half of the schools in the all-charter New Orleans district are considered "failing."

According to the Times-Picayune, a whopping 35 of the 72 schools in the district scored a D or F on their performance report, meaning nearly half of local public schools were considered failing, or close to it, in the school year ending in 2019. Since then, six of the 35 have closed.


While New Orleans has long been home to struggling schools, the data released this month are concerning. There was an increase of nearly 11% percentage points in the number of schools that received the state's lowest grades from the 2017-18 school year to 2018-19.

"It makes me angry and hurt. Because these are the children of our city," said Ashana Bigard, a parent of two children in Orleans Parish schools and a longtime critic of the post-Hurricane Katrina education reforms that rebuilt the district as a network of charter schools.

Me too. I'm angry and hurt by the great privatization scam that's been run on the citizens of post-Katrina New Orleans. As far as "failing" schools are concerned, as long as there's concentrated dire poverty in the city, there will be schools that are labeled "failing", whether they are charter or regular public schools.
Posted by Mike Klonsky at 4:35 PM