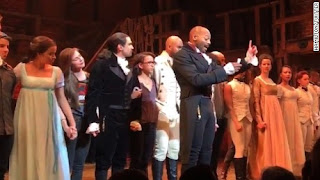 “We, sir, we are the diverse America who are alarmed and anxious that your new administration will not protect us, our planet, our children, our parents, or defend us and uphold our inalienable rights, sir." --  Hamilton cast to Mike Pence


“I do think we have a psychic connection, or you can say a deeper connection, with Donald Trump in a way that we simply do not have with most Republicans.” -- New York Times

"This is who we are. If you understand the history of this country, this is nothing new so we should not be shocked. If we look at 250 years of slavery, you look at Frederick Douglas during reconstruction seeing it overturned, you look at Ida B Wells going south to document lynching, and all the violence we always suffer. Then you would know it is the same country and we just need go get up in the morning and get ready to fight.” -- At NCTE

John McCain (Store this one away for future reference)


“I don’t give a damn what the president of the United States wants to do or anybody else wants to do. We will not waterboard. We will not do it...What does it say about America if we’re going to inflict torture on people?”  -- Halifax international security forum


“I’m not going to point fingers looking back. I think that is divisive. But Bernie makes a lot of sense in a lot of ways.” -- Huffington Post


We know through painful experience that freedom is never voluntarily given by the oppressor; it must be demanded by the oppressed. --  Letter from Birmingham City Jail

On issues of racism and bigotry, let me be very clear, there is no compromise. pic.twitter.com/anCFrunzGO
— Bernie Sanders (@SenSanders) November 20, 2016