Please, no more hand-wringing about under-voting, so-called "millennials". I say, so-called, because I don't really think there's one such thing as millennials. Of course I know there are young people who came of age by the year 2000. The problem is, the way the term is used in media and even by academics, it's come to mean young white people/voters/consumers. Don't believe me? Close your eyes and imagine a millennial. Who do you see?

The corporate world is smart enough to see black millennials as a vast potential profit center and for their role as "culture creators". But as you can imagine, they fail to mention the stark racial disparities in the population of incarcerated youth. Among the estimated 717,800 men ages 18 to 29 who were incarcerated at midyear 2010, 37% (290,100) were black and 23% (180,400) were Hispanic.

Here's a survey done by Harvard University’s Institute of Politics which made me cringe:


Asked about the nation's future, 51 percent of those ages 18 to 29 said they feel "fearful," while just 20 percent picked "hopeful." In responding to the question, which hadn't been asked in previous polls, every demographic group felt more fearful than hopeful, the institute said, with white women exhibiting the most anxiety, at 60 percent fearful. 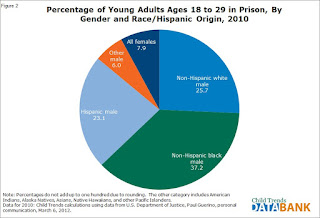 I can't help but wonder which millennials are even accessible to Harvard researchers? How about Spanish-speaking immigrant youth or young African-American men in what's left of urban public housing? Or in prison.

While there is some cultural overlap, black, Latino, urban poor men, women don't occupy the same space as middle-class or wealthy white youth when it comes to education, consumption, or voting. Averaging them all together is misleading.

For example, millennial 3rd-party voting has been limited almost exclusively to white people. While Clinton holds a 36-point advantage over Trump in most polls, there's no sense even asking black or Latino youth if they voted for Trump.

In 2012, 18-29 years-old accounted for 19% of the electorate nationally. This year, it's likely to be around the same with youth voting for Clinton by an estimated 28% over Trump. But when you look more closely at the numbers you find that black youth out-voted white youth  in '08 and by about 8% again in 2012. Will that happen again this year? It depends on what's happening and what has happened already on the ground.

Yesterday in Chicago, for example, where early voting numbers (more than 350,000) have smashed records set in 2008, hometown favorite Chance the Rapper hosted and headlined a free concert at Petrillo Music Shell in Grant Park called "Parade to the Polls." Concertgoers, led by organizers from Black Youth 100 Project, Chicago Votes and other groups, then marched with CTR to the nearest available early voting location, Cook County's early voting supercenter at 15 West Washington Street, where the line to get in the door spanned nearly two full city blocks.

Much better than hand-wringing.

After a free concert in Grant Park, @chancetherapper led thousands in a #paradetothepolls on the eve of #ElectionDay in downtown Chicago. pic.twitter.com/gQpidoVEWp
— The Chicago Reporter (@ChicagoReporter) November 8, 2016