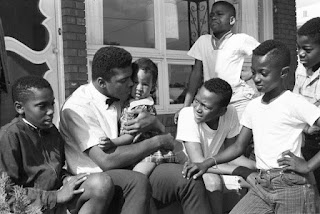 
"My conscious won't let me go shoot my brother, or some darker people, or some poor hungry people in the mud for big powerful America. And shoot them for what? They never called me nigger, they never lynched me, they didn't put no dogs on me, they didn't rob me of my nationality, rape and kill my mother and father... Shoot them for what? ...How can I shoot them poor people, Just take me to jail." -- Common Dreams


I’m going to support Bernie Sanders until he’s out of the race and I don’t think there’s any harm in doing that and he’s going to stay in to the end just exactly like Hillary did and she’s not going to be able to say a word about it. The Democratic party is going to have to deal with both Bernie Sanders and Elizabeth Warren when they get to the convention. They’re both keeping themselves in a position to have an effect and that’s fucking democracy. -- Real Clear Politics


“[Ari Emanuel] is a very good friend of mine. He calls me a lot. I call him a lot and we talk. He’s very political. Even though he’s not political, he’s political...He gets it.”  -- NBC Chicago

To ask Puerto Ricans to pay $370 million to create an unelected control board stacked with right-wing Republicans is beyond insulting.
— Bernie Sanders (@SenSanders) June 3, 2016