A look back on the confederacy of racists, a year later.


A year ago today, in response to Dylann Roof's act of racist terrorism in S. Carolina and the struggle to remove the confederate flag from the state house, I posted this: A Confederacy of Racists, which in my view, included the likes of S.C. Gov. Nikki Haley,  Lindsey Graham, Mark Sanford, League of the South,, Judge Gosnell, Strom Thurmond (deceased) and others.

Neo-confederate Haley, who was a long-time defender of flying the confederate flag, was then mentioned as a possible Trump running mate. But in May, she endorsed fellow confederate, Marco Rubio causing Trump to claim she was never in consideration for the VP job.

But despite their unspecified differences, Haley, like others in the GOP leadership from Speaker Paul Ryan on down, remains committed to "supporting the nominee", Trump. It's still a confederacy of dunces racists. 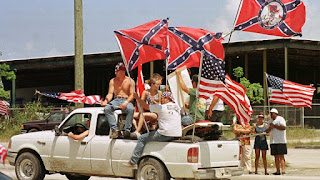 A year after Roof's racist act of terror, and in the wake of last week's slaughter of LGBT and Latino club goers in Orlando by Omar Mateen, the S.C. mass murderer still hasn't been brought to trial. Federal and state prosecutors are bumping heads over who will get the credit for his conviction. Roof and his lawyers are using the conflict to get him tried in a jurisdiction that is historically less likely to execute him as well as giving him the best stage to offer his racist views to a sympathetic audience.

Both cases have now become election campaign fodder as Republicans try and preempt any gun control moves by Dems and paint both crimes as part of a religious holy war. Yes, even white supremacist, Roof's attack a year ago, on black church goers, is now being described in right-wing media as "an attack on Christianity".