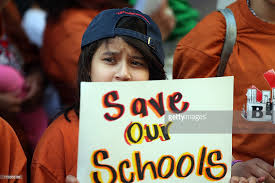 Ed writer deluxe, Valerie Strauss at (Donald Trump's fave) Washington Post asks, "Is the nation’s third-largest school district in danger of collapse?" She's referring to Chicago, of course, even though technically, Puerto Rico  has the nation's third-largest. Chicago is fourth, especially now that so many African-American families have left the city.

But the answer to her question is a definite, YES.


Dozens of principals, including some from the district’s best schools, have decided to leave, but those who are staying were warned recently that they could see 39 percent cuts in funding. That goes for teachers, after-school programs and enrichment programs. Chicago public schools, long in dire financial straits, face a budget deficit of more than $1 billion and must contribute $676 million to the Chicago Teachers Pension Fund by June 30, which, the Chicago Sun Times says, would leave only $24 million in the district’s coffers.

Meanwhile, problems with facilities have been growing  since the district, in what it said was a cost-cutting move, privatized cleaning services two years ago by awarding more than $300 million in contracts to two firms, Aramark and SodexoMAGIC (the latter associated with former NBA star Magic Johnson, who, incidentally, donated to Emanuel’s reelection campaign last year). Principals have repeatedly complained that schools were dirty and that complaints were not addressed in a timely manner.


Even as Emanuel fights with Rauner, public school educators are no fans of Emanuel. He has angered them for years by supporting key tenets of corporate school reform, including the privatization of public services, the expansion of charter schools and the closure of nearly 50 traditional public schools in a manner that infuriated parents.  In April, the union rejected an independent fact-finders recommendation that it accept a four-year contract offered by the city, and its president, Karen Lewis, said that the district’s financial problems could not solely be laid at the feet of the Republican governor, but also at the mayor’s and district leadership’s.