PARCC predicts college 'success'. So what? 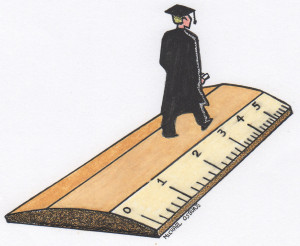 Got this in my mail today from the right-wing think-tankers at the Hoover Institute: "PARCC and Massachusetts state exams predict college success equally well."

My response: So what? So does poverty.

They're notifying us ed bloggers about a "first of it's kind" study comparing PARCC and MCAS as predictors of college success.

But unfortunately, there's still no better predictors of college success than poverty and race. That's especially true now that college tuition rates and the cost of student loans has made a college degree barely accessible to all but the children of the wealthy.

Without getting into all the methodological problems with this un-amazing new study, I will just say that it in no way measures the probability of high school students' college success -- meaning graduation with a degree in a reasonable and affordable number of years.

The study doesn't track students beyond that year and doesn't look at other factors, like creativity, perseverance, collaboration, vision and self-discipline, which are just a few basic qualities that correlate with college success. So the think-tankers are claiming way too much. And it made no difference which tests the students took. The results came out the same.

Not to mention (but I will) the fact that MCAS was never designed as a predictor of college success. Rather it was supposed to measure students’ proficiency relative to statewide curriculum standards. That all changed with the adoption of Common Core and the PARCC exam, designed by Pearson, Inc. and underwritten largely by the Gates Foundation.

The stated purpose of PARCC is to measure whether students are on track to succeed in college. Since standardized test scores align most closely with family income and education, school districts could have save billions by cancelling the tests and simply asking parents to send in the IRS forms.

By pushing these tests as predictors, the think-tankers and test makers are actually turning them into gate keepers.

The topper -- many of even the elite universities now pay little or no attention to applicants' standardized test scores. So much the better.
Posted by Mike Klonsky at 11:29 AM