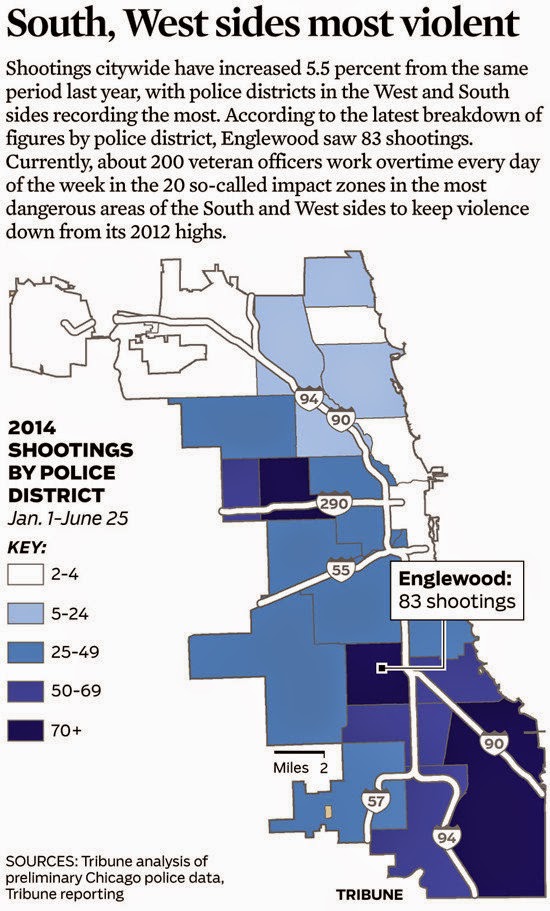 Rahm's PR team is trying to spin the slight reduction in Chicago murders as a plus for his policing policies even as our city's violence continues to outpace even New York and L.A..

Leaving Chief McCarthy's propensity for fudging the numbers aside for a moment, what are we to make of the latest report coming out of City Hall on Chicago's killing fields. The good news, according to CPD body counters is that murders are down from 2013. OK, they're only down by 9 from last year, but down is better than up, especially with an election for Rahm on the horizon.

But a closer look at the numbers shows that shootings have dramatically increased over that same period. More victims shot but slightly fewer have died. What to make of that? Probably just luck, if you call being paralyzed for life lucky. But certainly not an affirmation

Gun violence in Chicago has received increased national attention since Emanuel became mayor in 2011 when Chicago was the only city in the nation to record more than 500 homicides. Body counts are becoming politicized as the 2015 election approaches. The release of the crime statistics also comes as the department has flooded the streets with hundreds of officers working overtime to combat the expected summer rise in violent crime.

But it should be obvious by now that the gun violence epidemic in Chicago is not mainly a policing problem. Police distribution, mass arrests and community-to-prison pipeline only come into play after the shootings have occurred. The mayor has no plan to disrupt the easy access to guns on the street. In fact, he thinks gun control is a "political loser", a theory he expressed many times when he was Obama's chief of staff. His mass school closings are further destabilizing and blighting the very neighborhoods where shootings have reached pandemic proportions.

The point is, that until we have a strategy to improve the living conditions for children and families, police occupation of black and Latino neighborhoods isn't going to deal with the problem.
Posted by Mike Klonsky at 9:54 AM