Mayor 2% and the freedom riders 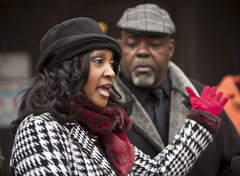 All the corporate reformers, from Duncan to Rhee,  have been claiming that education is a civil rights issue. Turns out, they were right. Only they are the violators.

Some are speculating that Rahm can kiss his 2016 White House aspirations goodbye. His ratings are in the toilet, according to Greg Hinz at Crain's. Daley left office when his ratings fell to around 30%. Rahm has now joined bed bugs, congressmen, and herpes, in the 2% club. The good news for Rahm's overstaffed PR Dept. is that no matter how many schools he closes, how obnoxious he gets, or how high the murder rate climbs, he still can only drop another 2 points.

I wonder if Byrd-Bennett is having second thoughts about her jump into Rahm's mess. I'll bet she thought she could just hold some community meetings, close a few hundred schools and then ride off to Washington with Rahm, a la Arne  and Barack. Sorry, BBB. You may be heading back to Detroit instead, after this train wreck.
Posted by Mike Klonsky at 11:28 AM