I don't know who writes headlines for S-T. But "feisty" isn't the word I would have chosen to describe the hundreds of parents, teachers, students and community folks who have been turning out for BBB's school-closing hearings. 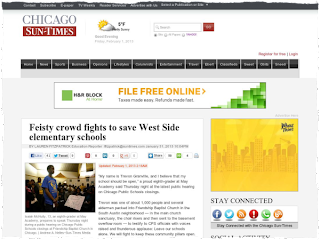 Maybe "angry" at the way their schools and communities are under attack. Maybe "desperate" in their efforts to keep some stability in the lives of their children and end the growing gun-violence epidemic. "Skeptical" is another descriptor that comes to mind over the attempt by the board to hold hearings basically to reign-in the crowds of protesting parents without really hearing their voices.

According to the S-T, the use of "breakout sessions" led by Loran Marketing consultants, which were used to disperse the unified and angry crowds at previous meetings, were canceled Thursday because the public speaking line was so long, according to a CPS spokeswoman. The professional facilitators have been paid by a grant by the Walton Family Foundation, the charity started by the founder of Wal-Mart stores that doles out millions of dollars every year for charter schools.

Yes, angry and rightfully so. Not "feisty." That sounds too much like a drunken crowd of soccer fans looking for a brawl.
Posted by Mike Klonsky at 11:21 AM