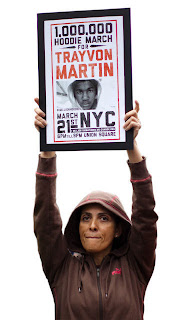 "If I had a son, he'd look like Trayvon. I can only imagine what his parents are going through. When I think about this boy, I think about my own kids." -- AP Wire

"Why isn't America outraged, that far more people die of gun violence in one year in America than the number of soldiers killed in the wars waged in Iraq and Afghanistan?" -- L.A. Times

“Taking the politics out of politics is like taking the money out of capitalism.” -- Meet the New Boss

“Don’t head for the doors when your kid’s in fifth grade or sixth grade — for the suburbs — because the city of Chicago is going to give you a high-quality life with a high-quality education for your children."  -- Sun-Times