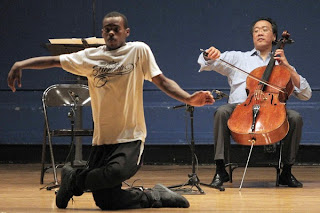 Telpochcalli is a small neighborhood public school on Chicago's southwest side. It was started by teachers as part of the early small schools movement. The school's mission focuses on arts integration and bi-lingual literacy. In this morning's Trib, Mark Caro writes:


What Yo-Yo Ma and friends brought to [Telpochcalli] Monday was dubbed an "arts strike," which is fitting because that particular iron is hot. Ma, the Chicago Symphony Orchestra's creative consultant, and Damian Woetzel, a ballet star/director/producer who serves with the virtuoso cellist on President Barack Obama's Committee on the Arts and the Humanities, gathered a diverse collection of performing artists at the Telpochcalli Elementary School in the predominantly Mexican-American Little Village neighborhood to illustrate the benefits of arts-based education programs. Don't miss the great video.

According to Caro, after the program Ma was enthusiastic about Telpochcalli.


"The school is spreading a fabulous message," he said, noting that teaching two languages helps students see the world from multiple perspectives. "Plus you add the senses, whether it's music, it's dance, collaboration — all these things are the ingredients that stimulate the imagination. Imagination and empathy are the key ingredients to creating an innovative workforce, a student population that is absolutely curious and passionate about learning, and this school is doing it the right way."

"This is the type of thing that could really make a difference in people's lives," he said, "not just enriching but giving the fundamental values of what builds a great society."