Rahm's model district is in shambles 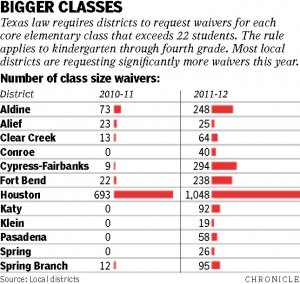 Mayor Emanuel and schools chief Brizard have been touting Houston, Texas as the model for their longer school day campaign.

"If you start in the Chicago Public School system in kindergarten," offered Rahm, "and your cousin lives in Houston, and you both go all the way through high school, the cousin in Houston spends three more years in the classroom."

Remember, it was Jonah Edelman and Stand For Children who fed Emanuel that nonsense. Well, it turns out that they couldn't have picked a worse model. The Texas "miracle" is a mess and Houston's schools and school children are once again in a state of crisis.

For one thing, the heavily black and Hispanic district is broke. Teachers are being laid off and class sizes are swelling.
According to the Chronicle:  Houston ISD, the largest district in the state, typically has the most contract waivers to increase class size above the legal limit, and the number jumped to 1,048 classrooms exceeding the cap this fall - up from 693 last year. Roughly a quarter of the district's elementary classes top the limit this year. Texas, like most states, does not cap the size of middle and high school classes, and elementary classes that get waivers have no limits.
Now you know where Emanuel is heading with this stuff.
Posted by Mike Klonsky at 6:38 AM