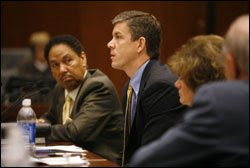 Bush’s Sec. of Education, Rod Paige had his big lie—he claimed he had eliminated dropouts in Houston’s high schools. It was called the Texas Miracle and together, he and Bush rode it to power in Washington. Now Chicago schools CEO Arne Duncan hopes to ride his own big lie, the Chicago Miracle, all the way to D.C. It goes something like this—closing schools in the black community, firing teachers, and privatizing school management has led to amazingly higher test scores:

"We are one of the few districts in the country that has shut down underperforming schools and replaced the entire school staff. This turnaround school strategy has taken some of our lowest-performing schools and doubled or tripled test scores within a few years. Same kids, different teachers, new leadership, a new educational approach, and the results are dramatic.” (Testimony before House education committee, July 17, 2008.)

The NYT, the same paper that exposed the Bush/Paige miracle, appears to have bought Duncan’s miracle. But Chicago educators know better. The question for Obama’s transition team is: Will this be a credible narrative to bring into the new DOE?

No, Virginia. There was no Chicago miracle. Here’s the real deal, and here ,and here.
Posted by Mike Klonsky at 11:00 AM