More on the Gates summit in Seattle 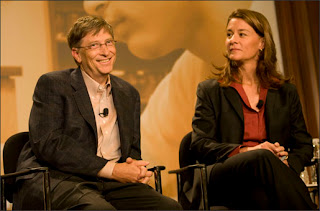 Bill & Melinda lay down the line

Elizabeth Green at Gotham Schools has more on the Gates Foundation’s Seattle summit meeting—just in case you’ve been holding your breath wondering about the correct way to fix public schools or how to teach your kids. Green highlights the main leverage points the $30 billion power philanthropy will use to drive national education policy in the Obama era.

“If their students keep falling behind, they’re in the wrong line of work, and they need to move on,” Bill Gates, the founder of Microsoft and principal benefactor to the foundation, said yesterday, announcing the new slate of initiatives to a private meeting of about 100 school officials, union leaders, and policy experts.

“To me, the scary thing is that they have so much money,” Ravitch said. “From the point of view of, let’s say, the democratic process, it’s frightening. That one foundation should have this much power, more so than our federal government, is alarming.”

Ravitch, ever the democrat, has good cause to be worried.

Side note: It still amazes me that after 8 years of repeated failures by multi-billion-dollar Gates top-down reform projects, Bill Gates can still put all of the onus for some kids “falling behind” (falling behind who?) on individual teachers. I wonder if he’s ever considered that some of the honchos at this meeting (including top guns at the foundation) might also be in the “wrong line of work?”

Also see Eduwonkette, “Bill Gates, U.S. Superintendent of Schools,” who is driven to laughter at the thought of the mega-foundation developing “its own” national standards and national test.

Even Russo is “creeped out” by the idea of Gates-made national standards.