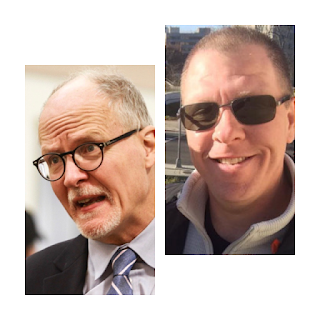 Did Paul Vallas think we'd forget that he was Gary Solomon's partner? Former schools CEO Vallas, who, has already run losing campaigns for Governor (2002) and with Pat Quinn for Lt. Governor (2014), partnered with Solomon in forming Synesi Associates. Synesi was one of the indicted companies that hired Barbara Byrd-Bennett as a consultant, in return for her support in obtaining millions of dollars in CPS no-bid contracts.

It was Vallas who taught Solomon and many of the rest of his Chicago crew, the ropes in one of the great hustles of public schools ever. It often included placing Vallas underlings in district administrative jobs around the country, in exchange for lucrative consulting contracts, often to provide expensive, but worthless professional development (like SUPES) for district principals and teachers. Solomon, who once claimed to be using the "Vallas model", took Vallas' ball and ran with it, offering illegal kickbacks directly to colluding school officials.

Now Solomon and Byrd-Bennett are both doing time. Vallas is running for mayor against a weakened but still top-dog in the race, Rahm Emanuel. He tells the Tribune that he had the plan on how to control the mess caused by Solomon and BBB. Only Rahm, having brought the corrupt pair in to CPS in the first place, wasn't about the compound the fracture by hiring complicit, former Daley-guy, Vallas.


It turns out, though, Vallas has his own story of being rejected by Emanuel that left some lingering hard feelings. In 2015, when soon-to-be-indicted Barbara Byrd-Bennett left as CPS CEO amid a kickback scandal, Vallas said he called the administration to offer his services to help stabilize the district.

Those overtures, though, were rejected, Vallas said. Emanuel, whose campaign declined to comment on the matter, ended up tabbing Forrest Claypool as the next schools chief. He, too, left amid a scandal after facing a watchdog’s allegations he “orchestrated a full-blown cover-up” over a clouted legal contract.

“I was told that I did not pass the loyalty test. And, of course, I proceeded to tell everyone I know about that, because it really pissed me off,” Vallas said. “I knew what that was: It’s not about being loyal to the cause or the mission, it’s about being loyal to the individual. It’s all about politics first, and everything else takes a back seat. I didn’t forget that.”

Solomon worked with Vallas at schools in Philadelphia and New Orleans. In Chicago, he’s better known for master-minding a contract kickback scheme with then-Schools CEO Barbara Byrd-Bennett. Both Solomon and Byrd-Bennett are now in prison.

“Gary was the vice-president for Princeton Review, one of the largest education service firms in the country. They did business with hundreds of superintendents,” Vallas said.

“I’m not the one who gave Gary Solomon a $20 million, no-bid contract.”