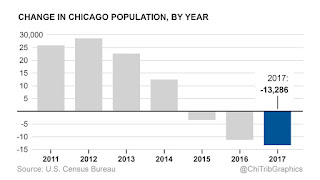 "If you think you've been seeing a lot more bright young people living in Chicago lately, you have", reads the lead sentence in yesterday's story by Greg Hinz in Crain's.

Substitute the word WHITE for BRIGHT and you get the picture.

Stories about Chicago's shrinking population are misleading. Cook County did lose 20,093 residents in 2017, according to the Census Bureau. Still, it maintained its spot as the second-most-populous county in the nation while also experiencing the largest numerical decrease in population compared with the nation’s other top 10 counties. It adds up to less than a 1% population change.

But as Hinz reports,


Between 2010 and 2016, the city of Chicago gained more households in a key category—total income of more than $100,000 with the head of household under age 45—than any city in the country except for far larger New York, according to newly analyzed U.S. Census Bureau data.

And while younger, wealthier white people move in, it is primarily the out-migration of African-American families that's responsible for the overall population decline.

The population is booming in the central area and rising on the North and Northwest sides, as well as along the South Side lakefront. But it continues to plummet in what Hinz describes as, "gang-plagued areas" on the South Side and, to a lesser degree, on the West Side.

Hinz' racist code words notwithstanding, there's been a decline of nearly 300,000 black people from the Chicago area in the past three to four decades along with the disappearance of well-paying union jobs, school closings and disinvestment in black communities.

Gradually replacing them are mainly members of high-end households, those with incomes of at least $200,000. That group grew even faster in Chicago than the over $100K/under 45 group, rising 65% to just over 75,000, according to the ACS data.

In short, black people have been pushed out of Chicago in mass, being gradually replaced by wealthier whites. You can call it gentrification or whitenization as you wish.

The fact that it is being done by plan, rather than by accident has been pointed out by many other urban sociologists and politicians. It's implications for politics and for public education in the city are astounding. Topics for another post.