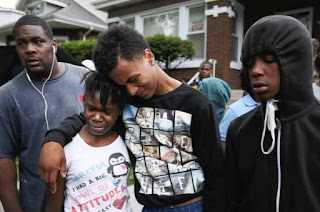 CHICAGO (WLS) -- It's been another violent weekend in Chicago, with at least 6 people killed and 32 others hurt in shootings across the city. [None shot in school.]

KIPP leaders and other corporate school "reformers" like Arne Duncan and Peter Cunningham, are telling public school parents to "pull their kids out of school until we have better gun laws."


The boycott proposition received momentum online, including support from parents and the founder of Teach for America, Wendy Kopp...

...“I’m in — let’s pick a date and start a movement no politician can ignore,” replied Jim Manly, the superintendent of KIPP Public Charter Schools in New York City.

After taking 14 years before firing their co-founder for sexual misconduct, it's no wonder that KIPP charter network is now forced to offer cash and prizes to parents as recruiting gimmicks. But their call for parents to boycott public schools, even in the wake of the Santa Fe school shootings, smacks of opportunism.

As brother Fred Klonsky points out in this morning's blog post:


For many Chicago young people, their public school is among the safest places Chicago parents can send their children each day. But more to the point, those like Cunningham and Duncan have a dismal history in proposing ideas for public school parents and  as public policy for others to follow.

Yes, we need strong gun control laws passed. No, that's not likely to happen with Trump in the White House and Republicans (many on the take from the NRA) controlling both houses of Congress without pressure from mass protests in the streets. Telling parents to keep their children home until that happens may be provocative, but it's hairbrained. Not serious. Poor leadership as usual.

In the same breath they propose it, they are already walking it back.

“We will see whether this gains traction, or something does, but we have to think radically.”

Yes, r-r-r-radically indeed. But there's nothing radical about punishing public schools for the sins of the politicians.

I'm recalling how Duncan and Cunningham blasted the tens of thousands of activist parents who actually won some important victories for their children by opting-out of school testing madness.

But Duncan claimed the opt-outers were simply...

I also recall how, when Democrats had even a slim chance to pass gun-control legislation during Obama's first term, Atty. General Eric Holder was told to "shut the f**k up" by none other than Obama's Chief of Staff Rahm Emanuel.

Oh, and speaking of guns, remember how Duncan tried to militarize the D.O.E. back in 2010? His purchase of 27 assault rifles had me wondering back then, if we needed an assault weapons ban on Arne?

I think Duncan's and the reformers' credibility as advisors to public school parents has been used up. Maybe it's time for them to to hold that thought.
Posted by Mike Klonsky at 10:52 AM