More evidence that PARCC test is bogus. Parents were smart to opt-out. 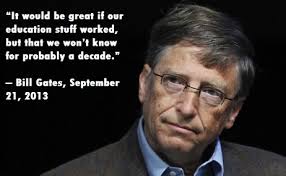 PARCC officials are still working to determine the full scope and causes of last year’s score discrepancies, which may partly result from demographic and academic differences between the students who took the tests on computers and those who took it on paper, rather than the testing format itself. -- EdWeek

Touted by Arne Duncan, bankrolled by the Gates Fundation and designed by Pearson Education Inc., the world's largest textbook/testing company, PARCC was supposed to provide us with the new and better model of "game changing", 21st-Century, high-stakes standardized testing. Aligned with Common Core standards and curriculum, it was billed as a high-validity measure, not only of student progress in learning, but teacher competency.

But now there's compelling evidence to show that what PARCC really measured had less to do with anything going on in the classroom than it did with demographics (race and class) and familiarity with computers.  Questions have arisen around the validity of the 2014-15 PARCC test results after officials from the testing consortium revealed that students who took the tests on computers scored, overall, lower than those who did not. Four out of every five students took the test via computer.

It was a year ago that Chicago's prison-bound schools chief, Barbara Byrd-Bennett, tried to delay giving PARCC for a year because the district didn't "have enough computers" to properly administer the tests. But threatened by State Board Chair Rev. James Meeks with a loss of federal funds, she and her boss, Rahm Emanuel, complied and gave them anyway, with some kids taking PARCC on computers and others taking the pencil-and-paper version.


“Therefore, we are directing you to administer the PARCC assessment to all students. If any district does not test, ISBE will withhold its Title I funds. We will also seek to recoup the state funds spent on any test booklets unused by the district, as well as any restocking fees charged to ISBE by our testing vendor.” -- ISBE Chairman Rev. James Meeks

It turns out, BBB was on to something. Now we learn that students who took the computer version of PARCC, scored lower on average than students who used paper and pencil.

Test results for the state's two million students plummeted to their lowest point in a decade with nearly 70% failing the PARCC.


"I think the promise of PARCC is greater than the promise of most of the other assessments we’ve ever had. Kids can test to the edge of their knowledge."


"It actually doesn't concern me at all. What Illinois and many other states are doing is finally telling the truth." (EdWeek)

The truth is that the thousands of parents who opted their kids out of PARCC testing were the smart ones. But it's the kind of smarts that standardized tests don't measure.