Surprised? No. Outraged at the board's vote to close 50 elementary schools, nearly all in the African-American community? Yes. Rahm's 6 hand-picked toadies did exactly what he told them to do and  each earned a pat on the head.


In the middle of Byrd-Bennett’s presentation, a woman walked out, saying “I’m sorry. I can’t take the lies no more.” She was followed by other protesters who yelled “This is a farce,” and “Children will die because CPS lies.” Byrd-Bennett paused to allow the hecklers to be escorted out, and then she continued as if nothing had happened. -- Sun-Times

Shannon Bennett, deputy executive director of the Kenwood-Oakland Community Organization, called the board’s vote “illegitimate,” and board members grew upset that KOCO members were speaking out of order. Bennett’s microphone was turned off as she said “You need to hear about this!” Security then removed protesters singing “We shall not be moved.”

This morning's protests were loud and militant. Demonstrators packed Clark Street's lobby. The line to get into the board meeting stretched all the way down the hall to the end of the building. Groups of protesters blocked traffic, moving from corner to corner to evade arrest after the police put out a "May Day" call. 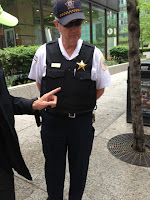 Flash Mob?
Chilling is the only way to describe a comment from this officer who warned an NLG lawyer that, "we have to balance 1st Amendment rights with the law against flash mobs." He was referring of course, to the new law signed by Gov. Quinn, supposedly targeting rowdy black teenagers in the Loop, which makes organizing an "illegal" gathering that much more illegal, with stiff prison sentences, if the gathering is organized using social media. Will the inevitable protests and acts of civil disobedience leading up to the school closings be considered flash mobs?

This is what democracy, Chicago-style, looks like.
Posted by Mike Klonsky at 4:06 PM