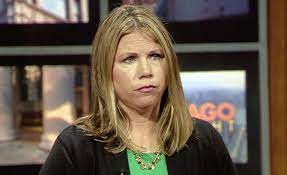 The people hired to take on corporate salvation projects have to have "Mussolini-like powers to execute and implement." -- Tribune editorial

Goodbye and good riddance to Tribune editorial page editor, Kristen McQueary who's leaving here  without a buyout. I guess when they know you're leaving anyway, there's no point in offering you early retirement.
Her departure comes after the Trib has already been gutted under the new management of Alden Global Capital, a New York hedge fund. Alden has done the same to about 200 other newspapers across the country including The Denver Post, the St. Paul Pioneer Press, the Boston Herald, The Mercury News of San Jose, the East Bay Times, The Orange County Register, and the Orlando Sentinel.

In March 2018, Margaret Sullivan, the media columnist for The Washington Post, called Alden "one of the most ruthless of the corporate strip-miners seemingly intent on destroying local journalism.

So far, more than 40 Trib journos and staffers have left the paper.

While I feel terrible for those who have lost their jobs and possibly their careers because of the Alden takeover, forgive me for shedding no tears over the loss of McQueary. She's always been a Chicago basher and especially hateful of its public schools. She and John Kass have long occupied the far-right corner at the right-wing Tribune.

In a racist 2015 rant, reflecting back on Hurrican Katrina, McQueary wrote:

I find myself wishing for a storm in Chicago — an unpredictable, haughty, devastating swirl of fury. A dramatic levee break. Geysers bursting through manhole covers. A sleeping city, forced onto the rooftops. That's what it took to hit the reset button in New Orleans. Chaos. Tragedy. Heartbreak.

Educators especially will recall similar thoughts on the part of then-Sec. of Ed Arne Ducan who anticipated McQuary in 2010.

I spent a lot of time in New Orleans, and this is a tough thing to say, but let me be really honest. I think the best thing that happened to the education system in New Orleans was Hurricane Katrina.

The idea is that cities like Chicago, Detroit and New Orleans are beyond repair and that a natural disaster, or a man-made one, is the only hope for a "rebirth."

In fairness, I should point out that in the face of public outrage, McQuary (like Duncan) did offer an apology. Well, it wasn't really an apology but rather an explanation.

I wrote what I did not out of lack of empathy, or racism, but out of long-standing frustration with Chicago’s poorly managed finances.

Whenever one has to explain that they are not really spewing racism, that it's only a metaphor...well, you know the rest.

Keep in mind, her devasting paen to disaster capitalism came only weeks after her Trib editorial calling for a Mussolini-type dictator to run the Chicago school system.

Email ThisBlogThis!Share to TwitterShare to FacebookShare to Pinterest
Labels: media