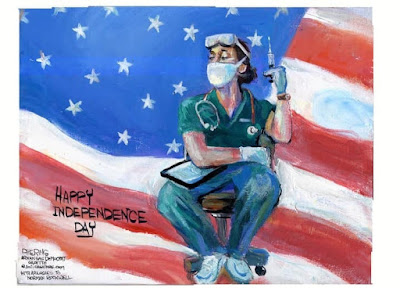 What Is Post-Trump Patriotism? ~ I thought of Frederick Douglass’ 1852 speech “What, to the Slave, is the Fourth of July?” It is a searing indictment of the hard truths of our history, of plunder, of enslavement, of a range of exploitative and unjust actions at the highest levels. At the same time, I’m a black person in America so I have no choice but to fight for the promise of America. -- Capital & Main

Vaccination against COVID-19 suffers from inequality and sluggishness nationalism, competition, and charity retreat and make room for internationalism, cooperation and solidarity, the world will be propelled towards an unprecedented tragedy in the history of mankind. -- National Herald of India

Robert P. Jones, author of “White Too Long: The Legacy of White Supremacy in American Christianity”

We observe this #July4th in the shadows of a #SCOTUS decision gutting our voting rights, following a white supremacist insurrection to undermine a fair election & a GOP that seeks it’s preservation by burying truth & stoking fear. We have to face the darkness and fight for light.

On this 4th of July we acknowledge the gap between our nation’s ideals and the racism that pervades our criminal legal system. While we create new polices, expand language access, and end the death penalty in San Francisco, we continue to fight for our ideals.

Tomorrow,
I'll be at the table
When company comes.
Nobody'll dare
Say to me,
"Eat in the kitchen,"
Then.

Besides,
They'll see how beautiful I am
And be ashamed—