The first thing Biden promised to do... 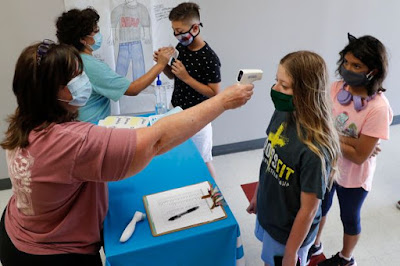 Biden was at a candidates event in Houston with National Education Association members in July 2019 when he said: “First thing, as president of United States — not a joke — first thing I will do is make sure that the secretary of education is not Betsy DeVos. It is a teacher. A teacher. Promise.” -- WaPO

Biden's cabinet is filling up fast. So far, once you get past all the chatter about a "second Obama presidency"; or about slipping a disgraced Rahm Emanuel in through the back door (NO, NO, NO please), or even about appointing Trump Republicans as opposed to anyone from the left, the process has been pretty transparent and necessarily fast-moving.

But we're still waiting for more than whispers about his pick for Secretary of Education. This may be the most important pick of all given that most school districts remain in limbo or possibly on the brink of collapse because of the pandemic and Trump/DeVos's disastrous response. But even under the new administration, plans for a necessary, safe reopening are going nowhere without an immediate influx of cash -- possibly a trillion dollars or more -- to the districts.

And it's not just about money. It's about radical transformation and the re-imaging of public education. We will never be able to go back to the old "normal". So where's the transformational leadership going to come from?

There are big questions to resolve about, systemic racial inequality, current, and post-pandemic standardized testing, privatization, student loans, universal pre-K and so much more. It will take much more than the new D.O.E. to undo the damage done these past four years under Betsy DeVos. Not to mention, that done under the previous decades of No Child Left Behind and Race To The Top.

But the appointment of a new ed secretary will be a signal about which way the new regime is headed. So how did the first thing on Biden's to-do list move to near-last? Where is this teacher that been promised us? Why the hush hush?

Progressives have been pushing some good people for consideration. So have the influential, pro-privatization, anti-union hedge-fund reformers like DFER.

I have a few recommendations myself. But I'm dubious that the left will be allowed any input into the decision. That's certainly been the case so far.