Talk about being anti-science. Now we assassinate scientists. 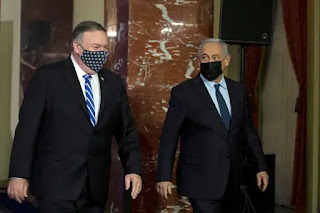 Well, at least now we know what Sec. of State Mike Pompeo and  Israeli Prime Minister Benjamin Netanyahu were secretly meeting about last week in Saudi Arabia. They were planning the assassination of another Iranian nuclear scientist, Mohsen Fakhrizadeh.

Remember, Israeli Mossad agents assassinated a half-dozen Iranian nuclear scientists from 2010 to 2012. Then, in January, Trump ordered the assassination of Iranian military leader Qasem Soleimani, in violation of international law, claiming that the killing would "stop a war, not start one." Soleimani's murder occurred during the 2019–20 Persian Gulf crisis, which began after the U.S. withdrew from the 2015 nuclear deal with Iran in 2018.

The difference this time is that there's little pretense about stopping a bomb or heading off an Iranian terrorist plot. Fakhrizadeh's killing, only weeks before the Trump/Pompeo gang will be forced to give up the reins of power, was simply a provocation aimed at sabotaging Biden's transition setting back any attempt at restoring the collapsed nuclear deal.

Prime Minister Benjamin Netanyahu of Israel, with the support of President Trump, seems intent on scorching the earth to make it harder for any return to diplomacy under President-elect Joe Biden.

Trump, in fact, appears to be hoping for retaliation from Iranian leaders which could then escalate the crisis and leave Joe Biden with a war on his hands when he takes over on January 20th. The Republicans' goal is to weaken Sec. of State Anthony Blinken's ability to negotiate a new nuclear agreement.

Biden is already committed to reopening talks with Iran along with his European partners. Iran has said repeatedly that it would go back into full compliance with the nuclear agreement if the Biden administration agrees to do the same and lifts the onerous sanctions piled on by President Trump.

This latest provocation was predictable. Some even earlier expressed fears that a new attack on Iran would be used by Trump to use war-time powers to put off the election. Obviously, that was just a pipedream.

Iran’s response to Soleimani’s killing was limited to a dozen missiles fired against two U.S. bases in Iraq. The hope is now that Iranian leaders will see the Trump/Netanyahu plot for what it is and be measured in their response again this time around.