From the halls of Montezuma... 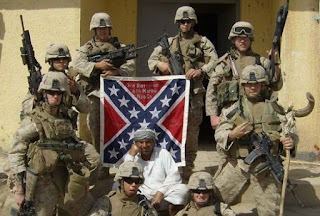 I see where the Marines have banned all depictions of the Confederate battle flag including on T-shirts and coffee mugs. According to Newsweek, it's an effort to cool "heightened racial tensions" spilling over due to protests against the death of George Floyd.

But this could be a slippery slope for the USMC. I mean, what's next, the banning of the corps from imperialist warring against peoples of color from the halls of Montezuma to the shores of Tripoli? 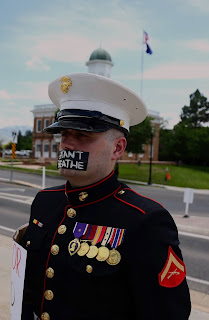 My favorite Marine...I feel like popping a salute to this courageous Marine, identified only as Todd for obvious reasons. A Marine with two purple hearts, Todd stood at Utah’s State Capitol with black tape over his mouth reading “I Can’t Breathe” and holding a sign that said, “justice for George Floyd, Breonna Taylor, Tamir Rice, and countless others…” Some photos show Todd's shoes melting in the blistering heat; the weather in Salt Lake City was in the 90s.

Back to reality for a sec...The fact that confederate memorabilia (they could have added WWII Nazi stuff as well) needed to be officially banned because it wasn't currently a good look, shows the depths of the problem. As does the fact that Todd was out there by himself. Whatever happened to Esprit de Corps?

Also worth a read...The answer may be found in this piece in the Marine Times: The Marine Corps: Always faithful — to white men, by retired Marine colonel Thomas Hobbs.
Posted by Mike Klonsky at 12:12 PM

Email ThisBlogThis!Share to TwitterShare to FacebookShare to Pinterest
Labels: militarism