Two important reads: Prison Abolition and the Crisis of Capitalism

Two important articles appeared in the mainstream press this past week. The first, is a New York Times Magazine piece, Is prison Necessary,  by Rachel Kushner about prison abolitionist Ruth Wilson Gilmore.

The ideology and politics around prison abolition and the role of prisons as an instrument of class oppression and subjugation are nothing new. Marxists and social reformers have been on the case for 150 years or more. People like Gilmore (Golden Gulag), Angela Davis (Are Prisons Obsolete) , Michelle Alexander (The New Jim Crow) and others, have been talking, writing and organizing around it for 30 years and have added a powerful critique of mass incarceration of African-Americans and people of color as part of the machinery of white supremacy and the legacy of American slavery.

The re-emergence of the abolition movement, with all it's differing trends and internal conflicts, has helped change the way many people think about prison, race, criminal justice and mass incarceration.

The thing I like most about Gilmore is that she sees prison abolition, not as a separate silo, but as part of a bigger strategy and set of tactics for radical social transformation.


For Gilmore, who has been active in the movement for more than 30 years, it’s both a long-term goal and a practical policy program, calling for government investment in jobs, education, housing, health care — all the elements that are required for a productive and violence-free life. Abolition means not just the closing of prisons but the presence, instead, of vital systems of support that many communities lack. Instead of asking how, in a future without prisons, we will deal with so-called violent people, abolitionists ask how we resolve inequalities and get people the resources they need long before the hypothetical moment when, as Gilmore puts it, they “mess up.”

The best part of the article has Gilmore struggling with a group of working class Latinx kids who challenge her by asking:  “But what about the people who do something seriously wrong?” Others chimed in. “What about people who hurt other people?” “What about if someone kills someone?”

It takes a while, with some strong evidence, to finally win them over. 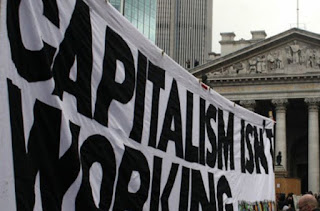 The second article by Greg Jaffe, appears in the April 20th Washington Post and bears the provocative title: Capitalism in crisis: U.S. billionaires worry about the survival of the system that made them rich. But, Anand Giridharadas, author of Winners Take All, offers a better headline.

Capitalism in crisis: Many U.S. people worry about the cruelty of the system that has kept them poor. https://t.co/gMNgKHPCd8
— Anand Giridharadas (@AnandWrites) April 21, 2019


Jaffe's piece hits on a favorite topic of mine, the role of power philanthropy and the way, what Jaffe calls, "the business elite" use their wealth to keep the economy churning and to do an end run around government and impose policies they hope will ameliorate the crisis of capitalism. It seems that some of these reformy billionaires, who gather in Davos, each year, still want to hold the world together long enough to enjoy their wealth.

According to Jaffe, the 2008 financial crisis may have revealed the weaknesses of American capitalism. But it was Donald Trump’s election and the pent-up anger it exposed that left America’s billionaire class fearful for capitalism’s future.


Now that consensus is shattering. For the first time in decades, capitalism’s future is a subject of debate among presidential hopefuls and a source of growing angst for America’s business elite. In places such as Silicon Valley, the slopes of Davos, Switzerland, and the halls of Harvard Business School, there is a sense that the kind of capitalism that once made America an economic envy is responsible for the growing inequality and anger that is tearing the country apart.

It's worth a read.