Rahm, no heart for the struggle. Who will wear the crown? 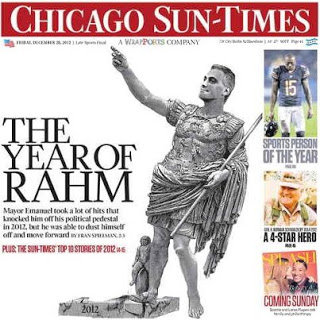 After a brief celebration and a listen, or two, or three, to Little Emperor, I came back down to Earth and began considering the changes ahead in a post-Rahm Chicago and the reshaping of the upcoming mayor's race.

Most, but not all of my friends are exuberant over the news that Rahm is bailing after two terms. He claims he's trying to save us Chicagoans from a bloody election battle (no heart) and that he wants to spend more time with Amy and the kids. But we all know that's bullshit. I'm kind of sorry we didn't get a chance to give him a beating in the election. But I'll take it.

Like his predecessor, Mayor Daley, Rahm could read the numbers on the wall. His closest advisors and wealthy patrons have been telling him since May that his pathway to victory was closing and with the Laquan McDonald cover-up re-emerging around the Van Dyke trial, more protesters about to fill the streets and block up the highways, and more school-closing battles on the horizon... Discretion became the better part of valor. Tough-talking Rahm wimped out.

But we need to keep in mind, he's still there 'til February and a lame duck can do a lot of harm, especially in the schools. It's called, loot-and-pillage. Rahm can also use his campaign cash and his organization to back a candidate of his choosing. Somebody with like-minded politics but without all his baggage.

At first I was thinking, someone like Arne Duncan. He's been feathering his nest over at the Emerson Collective since his return from his Race To The Top days as Obama's ed chief. But talk about baggage? My god! And Duncan would be running, not only against the CTU and every conscious teacher in the city, but against charter and testing-loving Paul Vallas, the very man who first brought him into the ed game in Chicago. A three-way split in the white vote would leave Rahm's minions in the same shape they are already in.

So since a lot of you have been asking. My bet that the next wave of big election cash will flow towards Toni Preckwinkle and that a LatinX will enter the race, just like Ald. Rick Munoz told us they would, when he was our guest on Hitting Left. Possibly someone like IL Comptroller, Susana Mendoza.

Then again, as Susan never lets me forget, I thought Clinton would beat Trump. 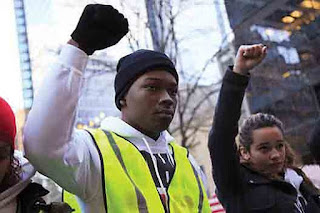 The youngest mayoral candidate and Black Lives Matter activist, Ja'mal Green will be our guest on Hitting Left this Friday, 11-Noon. Lots to talk about. You bet.
Posted by Mike Klonsky at 9:17 PM