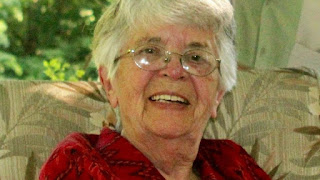 It's May Day and thousands of us will be marching for social justice in Chicago, as we do every year. This year, I'm drawing inspiration from Jean Gump, who recently passed away at age 90. Jean grew up on Chicago's south side and was a life-long civil rights and an anti-war activist. She served four years in federal prison for her participation in an anti-war protest on Good Friday, 1986.

She organized against the racism of the Daley machine in Chicago and along with her children, joined Dr.  King in his 1966 march in Marquette Park against segregated housing. She also marched with Dr. King in Selma.


As a member of the Niles West High School P.T.A. in the late 60's, Jean Gump often sided with students against teachers and administration concerning Vietnam War protests. She became involved in protests against handguns and for rights for the handicapped. On two occasions, she supplemented her already large family by taking refugee families from Vietnam into her home.

According to the Chicago Tribune:


Gump was part of a group called the Chicago Life Community focused on protesting nuclear weapons and other tools of mass destruction. The group protested weekly outside the downtown Chicago headquarters of Morton Salt, protests aimed at the military weapons business of what was then Morton Thiokol Inc. Those protests, her daughter said, led to frequent arrests.

It was Good Friday, March 28, 1986, when Gump and two others cut a fence and approached a missile silo at Whiteman Air Force Base in Missouri. Gump and the others were arrested. She was sentenced to eight years in the Alderson Federal Prison Camp in West Virginia. Her sentence was later reduced to six years and she was released after serving four years and one month of the sentence. She refused to pay $424 in damages, a refusal that resulted in missing a son’s wedding because the conditions of her parole didn’t allow her to leave the state of Michigan during the parole period.

This Reader article from 1987 describes Jean Gump's moral conviction as well as her courage and commitment to civil disobedience.


Ironically, Gump's sentence left her holding the key to her own jail cell, which she could unlock at any time. If she paid the damages and agreed not to participate in more protests, the government would be willing to free her for time served, says her husband, Joe. But for Jean that's impossible.

"It's hard being in prison, it's really hard, but I wouldn't be anywhere else. All the while I sit here everyone knows that disarmament is a crime but building weapons to destroy the world isn't a crime. It's something to think about."

Her husband, Joseph, died in 2014. In 1987, he was convicted of conspiring to damage another Missouri missile site. He was imprisoned for three years.

Jean Gump was last arrested in 2010 at the age of 84 following a protest at the Y-12 National Security Complex in Oak Ridge, Tenn.


Most people go to prison for violating their conscience. The Gumps were sentenced for rigidly cleaving to theirs. Ms. Gump’s moral code could be condensed into a single sentence: “If you don’t act against it, you must be for it.”