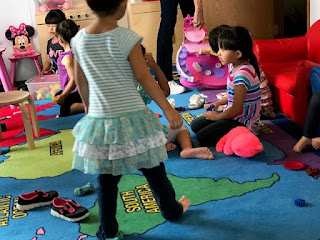 To celebrate our 50th wedding anniversary, Susan and I road-tripped out of Salt Late City, up through the Uinta mountains of northern Utah, to the the Wind River Arapaho Reservation in Wyoming. That's where our old friend Mary Headley runs the small Arapaho Immersion School.

I first met Mary and fellow veteran teacher Sadie Bell at the Standing Rock encampment in 2016, outside the encampment school. We spent a couple of hours talking about small schools and language acquisition and they invited us to visit Wind River. They told me about the work they were doing, trying to save Arapaho language and culture by starting a school based on language immersion.

The school serves a reservation community hard hit by poverty, unemployment, and high male incarceration rates. The town of Arapahoe itself has few businesses and no grocery stores. To shop or eat at a restaurant, you need to travel outside the reservation, to white-run Riverton. But the community has a proud history of struggle and cultural tradition that binds it together and has survived more than a century of genocidal attacks on Native American tribes.

Currently, this small school, which operates (at least for now), outside the public school system,and with little money and few resources, is a model for other tribal educators as far away as Oklahoma. For the veteran educators who created it, this school is a legacy project; today, they estimate there are fewer than 100 fluent Arapaho speakers. They are laying the foundation for what they hope will be a strong cultural identity and linguistic fluency and comfort among a new generation of Arapaho youth. 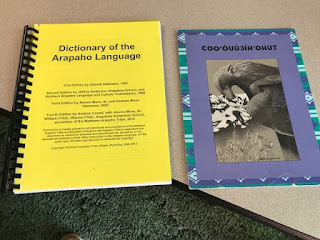 Children at the early-childhood school are immersed in Arapaho culture and learn literacy though play, story telling, song, dance, and other group activities. For many, the two meals a day at the school are their main source of nourishment.

We spent yesterday observing and talking with school leaders and teachers like former Principal Wayne C'Hair, one of the authors of the Dictionary of the Arapaho Language. The project of crafting a written language and preserving the language has been underway since the 1980s. Recently a team has launched a new Arapaho app for the iPad. Mary Headley and others are working on dubbed editions of several children's movies into Arapaho, the first of which is "Spirit Horse," soon to be followed by an Arapaho "Bambi."
Folkloric tales for children, especially animal stories, are being translated and published for use in the schools.
Posted by Mike Klonsky at 7:38 AM