As in West Virginia, educators in Oklahoma have reached a breaking point, fed up with stagnant wages and cuts to education funding. The idea of a walkout began to gain traction in mid-February after a proposed salary increase failed to win enough support among lawmakers. A ­superintendent circulated a petition asking colleagues if they would support a teacher walkout. 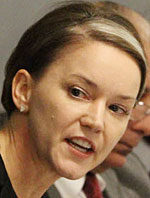 I WAS REVIEWING the press for Weekend Quotables this morning, when I came across this Washington Post story on the growing revolt among low-paid Oklahoma teachers.


At a local restaurant, it was a teacher who served Deborah Gist recently. At the Reasor’s grocery, there’s sometimes a teacher behind the register. And then there was the Uber that the school district chief hailed to catch an early-morning flight — a teacher sat behind the wheel, trying to earn some money before heading to the classroom. There was a stack of student journals on the passenger seat.

“It’s just so wrong that it just hurts my heart,” said Gist, who has been superintendent since 2015.

My reaction to the hand-wringing quote -- Wait a minute. Could this possibly be the same Deborah Gist?

And sure enough, it was.

For those who don't know, or can't recall, it was Gist, fresh out of Eli Broad's training academy, who served as Rhode Island's state superintendent back in 2010. She's the one who pushed local Superintendent Frances Gallo to fire all the teachers and staff at Central Falls High School back in 2010. In the face of national blowback from unions and school activists, Gist was forced to retreat and most of the teachers were hired back. But the school and the entire town of Central Falls never fully recovered from the debacle.

The worst part was Obama's Ed. Sec. Arne Duncan giving his nod of approval to Gist's assault on the state's teachers and the President himself hailing her mass firing as an "act of courage".

As teacher Paul Murphy wrote in a recent WaPo column,


The staff of Central Falls High School in Rhode Island sure didn’t sign up expecting the president of the United States and the secretary of education to endorse their collective firing. While we may have expected to be treated like dirt by Republicans, we didn’t sign up knowing the Democratic Party would abandon us in such a publicly humiliating way.

It's only fitting, I suppose, that after being run out of R.I., Gist would wind up in "right-to-work" (for less) state, Oklahoma, where public schools are miserably underfunded and teacher pay is at the nation's bottom (ranks 49th), lower even than West Virginia where the rolling teacher revolt began earlier this year.

So sorry, Deborah Gist. Your hand-wringing won't get it. We remember you.
Posted by Mike Klonsky at 6:30 PM