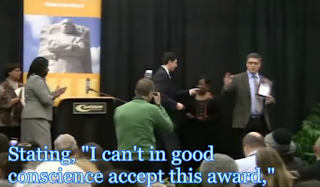 Is anyone buying Paul Ryan's stale excuse for jumping ship? No, he doesn't really want to spend more time with his children. He hires people to do that. After years as a corporate shill, busting his state's unions and putting hundreds of billions of taxpayer dollars into his wealthy patrons' pockets through regressive taxation, Ryan is joining the mass exodus of Republicans from DT's sinking ship for one reason only. He knows his day of reckoning is near.

My favorite Ryan story took place back in 2014, when he was called out by a Wisconsin high school, social studies teacher named Al Levie, who had been one of three recipients of a Martin Luther King Jr. humanitarian award. During a celebration honoring the late civil rights leader, Al refused to accept the award from Rep. Ryan, who he correctly called, "a lackey of the one percent". He then told the audience,  “I can’t in good conscience accept this award, as a humanitarian, Paul Ryan stands for everything I don’t believe in.”

After Ryan spoke, Al criticized the congressman’s policies before being walked off the stage. He had earlier made it clear that he would like to see collective bargaining restored in Wisconsin, fair immigration reform and a fair tax system and more.


“Paul Ryan had no business at a Martin Luther King event, it’s totally hypocritical. On the one hand he votes to slash health care, while on the other hand, King dedicated his life and he died for it — for people to have adequate healthcare, to have adequate jobs.”

I imagine, Al is smiling a little today, both at the news of Ryan's imminent departure and of the rolling teacher wildcat strikes in West Virginia, Oklahoma, Arizona, Kentucky and more.

Then there was the time in 2012 when V.P candidate Ryan ventured down to Chicago to counsel his pal, Mayor Rahm Emanuel on how to break a teachers strike.


"I've known Rahm Emanuel for years. He's a former colleague of mine. Rahm and I have not agreed on every issue or on a lot of issues, but Mayor Emanuel is right today in saying that this teacher's union strike is unnecessary and wrong. We know that Rahm is not going to support our campaign, but on this issue and this day we stand with Mayor Rahm Emanuel."

Then Ryan artfully called out Pres. Barack Obama, who, in the middle of his re-election campaign, and worried that his support for the striking teachers would split his Democratic Party base, was trying to walk the center line  in the epic battle between the CTU and MRE. A sign of things to come.

My favorite Ryan quote came from another visit to Chicago a year earlier. Speaking at the city's Economic Club, Rep. Ryan said that Obama's attempt to raise taxes on the wealthiest Americans amounted to “class warfare” and "class envy".  Ryan only wanted to make sure that class warfare remained one-sided.


Ha! The war is already being waged against the poor and vulnerable, and the envious have-nots didn’t start it. The right and its cabal of economic cannibals did.