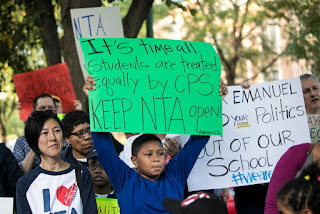 It's time to reconsider the word, "underutilized" as CPS code language for schools in black communities, in the same way "Norwegian" has become code for white in the Trumpian lexicon.

Chicago Public Schools finally released data last month, showing that it considers more than 200 of its schools -- almost a third of the total, and nearly all with black or Latino student populations -- to be underutilized and therefore primed for closure and possible replacement with privately-run charters. CPS no longer calculates space use for privately-managed charter or contract schools.


Some 229 buildings now are considered underutilized, nearly as many as CPS considers to be efficiently used. That’s according to a newly-revised formula CPS employed to compare numbers of classrooms in a school with the number of students enrolled, calculating approximately 30 kids per classroom.

Another 29 buildings have been deemed overcrowded, including a few selective enrollment schools that can screen applicants and limit who gets in. That leaves 231 “efficient” buildings — now defined as where enrollment constitutes between 70 and 110 percent of a school’s ideal capacity. The efficient range used to be between 80 and 120 percent.

The study's release, timed with the lifting of the self-imposed cap on school closings, immediately caused confusion since officials had once again, changed the way they calculate “space utilization,” leaving principals and parents unclear about how their schools’ capacity grew since CPS last made the calculations.

Whether it comes to evaluating test scores, graduation rates, special education, or crime rates, Mayor Rahm Emanuel has never been adverse to juking the stats for political advantage.

More importantly, in communities, where the needs for learning spaces as well as for youth and adult social activities are great, there's no reason for so many schools to be shuttered, left as vacant hulls contributing to blight and crime and destabilizing the lives of so many children and families.

This is especially true in neighborhoods like Englewood and South Loop where the city is about to close even more schools while spending hundreds of millions of dollars for new school construction, only blocks from the school buildings they are about to abandon. The question as always, is who are the new schools for?

I'm looking forward to the release of  Eve Ewing's new book, When the Bell Stops Ringing: Race, History and Discourse Amid Chicago's School Closures. I caught up with Eve last night at the Read/Right Library in Humboldt Park, reading from Electric Arches and talking CPS school closings. She was right on time.

It's impossible to understand so-called underutilization or shrinking school populations without coming to terms with the forced mass exodus of hundreds of thousands of Chicago's African-American families over the past three decades. It's an exodus which gov candidate Chris Kennedy, for his own opportunist reasons, laid on MRE's doorstep, for what Kennedy called the mayor's “strategic gentrification.”

Kennedy caught hell from the media for "playing the race card" and the Rahm-protecting Sun-Times even called him a "Stalinist". But he was only saying what everybody already knew, although the push-out of black and poor people from the city predates Rahm's regime. It's been part of well-documented initiatives to whitenize Chicago that goes back decades involving not only previous mayors, but the city's biggest investment banks, corporations and real estate developers, including Kennedy himself.

So whenever a new study on school utilization by CPS comes out, you can bet that the plans for the next wave of school closures have already been laid. Why even bother to go through another round of phony community hearings. Parents, students and community members have consistently voiced opposition to closing their schools only to have their voices ignored.

With former school CEO Barbara Byrd-Bennett in prison and former CEO Forrest Claypool forced to resign in the face of corruption charges, it will now be up to Rahm's newly appointed CEO Janice Jackson, to sell "underutilization" to the community.