Some thoughts on the swearing in of Doug Jones 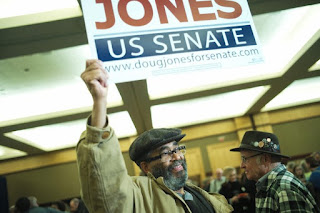 Yes, Doug Jones, is a self-described centrist Democrat who still talks the talk about some illusionary bi-partisanship with Trumpists rather than resistance. But he will likely vote with Dem leadership to protect DACA, Social Security and Medicare, and labor (maybe), etc... when push comes to shove. But white lefties were wrong to attack him during the campaign or to sit it out, leaving the burden of community resistance on African-American (mainly women) voters and activists.

It's great that Jones is being sworn in today, instead of child molester and white supremacist, Roy Moore, who was backed by Trump. Time for lefties as well as the DNC to get their acts together on campaign strategies as well as on support for the revived women's movement, southern freedom struggles, Black Lives Matter, Medicare-for-all, Fight for 15, and the Poor People's Campaign, before the 2018 midterms.

Also, Dem leaders need to stop making excuses for their 2016 failure. Loss to Trump wasn't Susan Sarandon's fault or whatever the Russians, Saudis or Israelis did to swing the election Trump's way. Yes, they did it and will do it again with Trumpists' "treasonous"  collusion. And yes, Susan should have voted for neo-lib Clinton, given the choice at the time. But that didn't cost Dems the election. Put that behind you, DNC, and open up the party to Sanders' base, as well as black and Latino young activists, in an open unity process.

Otherwise, to quote Marx, it's "the first as tragedy, then as farce." For those interested, that well-known quote came from The Eighteenth Brumaire where KM also comments:

An observation worth considering as we head into the new year. Let's start from a hard assessment of those circumstances and work from there. 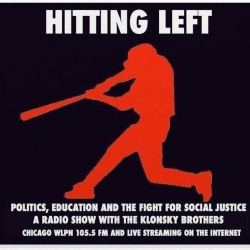 BROTHER FRED & I got into this very topic during our last two interviews on Hitting Left with Emma Tai from United Working Families and Kenzo Shibata from DSA. Listen to the podcasts here.
Posted by Mike Klonsky at 12:57 PM

Email ThisBlogThis!Share to TwitterShare to FacebookShare to Pinterest
Labels: elections