A week ago I posted about Amazon not being the kind of company Chicago needs. But Mayor Rahm Emanuel and Gov. Bruce Rauner continue to grovel before the king of e-commerce offering huge tax and real estate giveaways that will only push the state and city into more debt, hurting schools and wiping outpensions. All this in the hope that Amazon will bring "50,000 jobs" to the city.

Sadly, most local pols, including Democrats running to replace Rauner, have drunk the Amazon jobs koolade. So has the media for the most part. On Friday, a planted Amazon good-news story claims the company is about to hire 10,000 holiday workers in IL.


Amazon is hiring more than 120,000 seasonal workers nationwide, including 10,000 new employees in Illinois. That means jobs at local fulfillment centers, sortation centers and customer service sites — and some of those positions could become permanent, according to Amazon.

What's left out of the Patch piece is that these are non-union, mostly minimum-wage jobs offering most of these workers little or no chance for full-time employment. The work is mind-numbing and repetitive. 50-hour weeks are not uncommon and managers are continually relocated.

As for the claim that thousands of seasonal workers were given full-time jobs last year, it's important to remember that good-paying "full-time" jobs with Amazon are not usually permanent jobs and that those few who are hired full-time are usually replacing some of the thousands who quit or are fired each year. 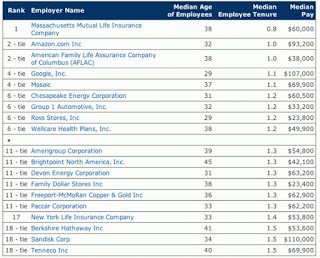 In fact, Amazon has the second highest worker/turnover rate of any of the Fortune 500 companies. Turning over a big chunk of the workforce each year (most new-hires are gone after just nine months) saves the corporation millions of dollars on benefits like medical coverage and paid vacation days.

Amazon has built its empire around fast shipping speeds and generous return policies. But little is said of it's "dangerously intense internal company culture".

Last year, Bloomberg reported that the company was using flat-screen televisions in its warehouses to shame workers for alleged theft. The workers are not identified by name; rather, they are shown as black silhouettes with the word “terminated” or “arrested” emblazoned before an account of what they stole from the company and how they got caught. In the absence of a TV monitor, workers told Bloomberg that similar information was posted on walls or bulletin boards around the office.

A former Amazon contract worker wrote this, in an open letter to CEO Jeff Bezos:


There’s a lot of talk about how Amazon is a great place to work. They have showers in the basement. You can get your bike serviced while you work. And there’s food trucks! But if you really want to create a positive work environment and generate productivity and employee loyalty, give your employees some job security.

That's not likely to happen. Amazon, stay away.
Posted by Mike Klonsky at 5:24 AM