How vouchers came to IL. Cardinal Cupich lets cat out of the bag. 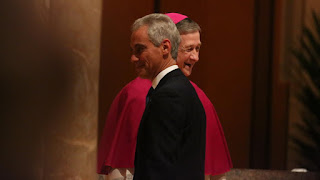 First, let me thank the good Cardinal for setting things straight. There was no arm-twisting necessary when it came to getting Democrats to vote for the school funding bill that brought vouchers to IL Most came along willingly with Gov. Rauner and the Republican caucus, following the lead of Madigan, Cullerton, Rahm Emanuel and the rest of the state's Democratic leadership down the school privatization path.

The bill, which will divert millions of taxpayer dollars from cash-strapped public school classrooms into private, religious, and charter schools, also offers massive tax breaks for the state's wealthiest. It's what the CTU calls, "a reverse Robin Hood scheme." They're right.

Cupich tells Crain's how he turned out to be a timely lobbyist for a school funding bill containing controversial tax credits for Catholic and other private school donors.


But he says he twisted no arms to help win passage earlier this week. Nor did he travel to Springfield. Instead, he spoke with legislative leaders by telephone amid ongoing deliberations over changes to the state school aid formula and more money for Chicago Public Schools.

"I don't like to go into the boiler room," he tells Crain's. "What leverage do I have?"

The bill demolishes the long-standing principle of church/state separation and throws a gold-plated lifeline to private and religious school operators who are free to teach the Church doctrines, ie. anti-contraception, "intelligent design", anti-LGBTQ, etc.. free from public accountability.

I'm not in any way, connecting this to the giant campaign donors who accompanied Rahm and financed the mayor's massive delegation to Rome last year, to witness Cupich's elevation by the Vatican to Cardinal. That just wouldn't be fair of me.

White flight...
Chicago's archdiocese began closing most of the city's Catholic schools in response to white flight back in the '70s, when many white parishioners fled from the inner city to the suburbs and school seats became filled with the children of mainly-poor immigrants from Mexico and Central America. More recently, it's school population dwindled as many black Catholics joined the great black out-migration from the city and state.

In the last 30 years, the number of full-time teachers and administrators has dropped to 5,105 from 8,441, while the share of higher-paid lay teachers has soared. Only 87 teachers are in a religious order, compared with 1,529 three decades ago. The archdiocese says per-pupil spending is a median $5,745, a figure that is slightly higher for Chicago-only schools.

With the wealthiest being given a massive tax break for investing in the so-called "Scholarship Fund", taxpayers will have to make up the loss of revenue with massive increases in their property and other regressive taxes.

The whole scheme was hatched months ago by Rahm and Cupich, evidenced by recently revealed exchanges of emails between the two. The emails showed that the lobbying cardinal had an inside direct line to the mayor and that Rahm expressed an openness to the voucher idea months ago.

“I am personally interested in the proposal to fund a $20 billion federal education tax credit as part of the federal tax reform. I am convinced that this could be an enormous boost to the Chicago schools and the thousands of parents who use our [Catholic] schools,” Cupich wrote. “I am grateful that you understand the importance of school choice for poor families who see this as a viable way for the family to move out of poverty.”

Then, Rahm's closed door meeting last April, with Betsy DeVos, appears to have put the plan into motion. Who would have thought that blue state Illinois would become the showpiece for DeVos' "school choice" agenda?

Cardinal knowledge...
Cupich lays out the rationale that moved Rahm and the Democrats to support the bill. He claims that by enticing students and families out of CPS, he saves taxpayers $1 billion a year through lower public school enrollment.

By extension, one can only imagine how much money taxpayers would save by getting rid of public education entirely. Zero students, zero cost per/student to taxpayers.

It's like a thief stealing your wallet while on you're on your way to the grocery store, and then telling you how much money he saved you on your food bill.