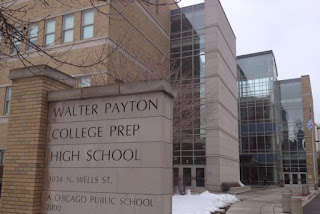 Modern school reform has become nearly synonymous with racial re-segregation and two-tier education. There's one tier for the elite and one big tier for the rest of us. Sociologists call it social-reproduction, wherein school systems become institutions that transmit social inequality from one generation to the next.

The election of Donald Trump and his selection of Betsy DeVos, with her single-minded emphasis on "school choice", as education secretary, promises to make the gap between the tiers even wider. But the use of charters, vouchers and selective-enrollment schools as competitive forces vis-a-vis traditional public schools predates Trump/DeVos by decades.

Ironically, selective-enrollment schools and charters originally were envisioned as tools for desegregation. Selective enrollment and magnet high schools in particular were created in the 1970s after consent decrees forced school districts to desegregate.

The news out of Chicago, where Mayor Rahm Emanuel has autocratic power over the public schools, is that the city's selective-enrollment high schools have become even more exclusive. In 2009 the Chicago deseg consent decree was liquidated by a federal judge with support from Arne Duncan and selective-enrollment and charters have dropped all pretense of being about racial equality.


Getting into a selective enrollment high school got even harder this year — so much so that members of next year's freshman class at Walter Payton College Prep High School who won one of the coveted seats outright earned at least 898 points out of a possible 900 points, according to cutoff-score data released by the district.

While some provisions are made to admit a quota of "economically disadvantaged" students to schools like Payton, those students are often re-segregated or tracked to lower tiers within the school itself.

The implications extend far beyond high school, impacting college admissions and job opportunities. The two-tier system also places enormous pressure on parents and students starting in pre-school and up through elementary and middle grades. It's this pressure that feeds the system of tracking and sorting based primarily on standardized tests.

DNAinfo reports that anxiety is running high across the city as eighth-graders learn whether or not they have been accepted into one of Chicago's selective-enrollment high schools.


"It's insane," 47th Ward Ald. Ameya Pawar said of the pressure on middle-schoolers."To try to build one's life around a test score of 99.8 or 99.7? That's not what an education is supposed to be about."